Book Review: The Iron Triangle: Inside the Liberal Democrat Plan to Use Race to Divide... by Vince Everett Ellison

I could have highlighted almost every page of this book!

The Iron Triangle: Inside the Liberal Democrat Plan to Use Race to Divide Christians and America in their Quest for Power and How We Can Defeat Them
by Vince Everett Ellison 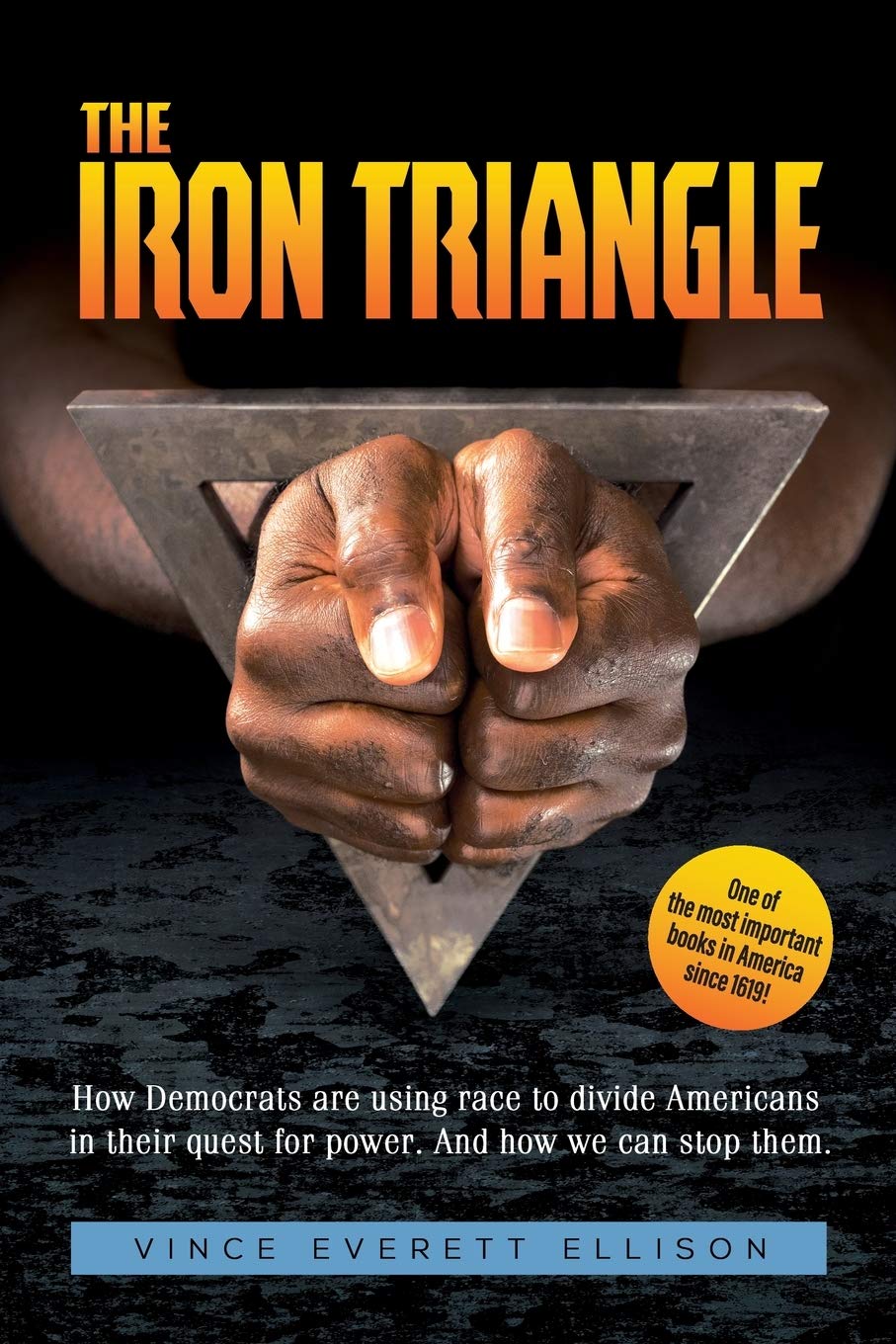 To save America and the world, Conservatives must first answer this one very important question: Why do the vast majority of Christian African Americans vote for the Atheist/Anti-Christian, Liberal Democrat Party?
This book answers that question. Why is this important? The answering of this question and the implementation of the suggested remedies will greatly improve America's chances of ushering in an enlightened era of freedom and prosperity, while critically damaging its primary source of evil: The Democrat Party. This evil party could not survive without 90% of Christian African American vote.
Conservatives wonder: Why would African Americans forsake their children, spouses, communities, lives, freedom and GOD for the Democrat Party? Presently, Democrats control every Black ghetto, every failing Black school, every drug corner and every prison in America. Amazingly, the majority of African Americans love them for it. Why? This book explains it.
This book argues that falsely accused White Christian conservatives have nothing more for which to apologize. Despite slanderous accusations of racism and hatred, this book reassures Conservatives, and encourages them to press forward. The real oppressors are now unmasked. To control African Americans during and after the Civil Rights Movement, White Democrats organized and formed an unholy alliance with most Black preachers, Black civic organizers and Black politicians. I call this trifecta the "Iron Triangle." It has worked perfectly.
This book exposes the greatest continuous betrayal in history: The betrayal of America in general, and of Black America in particular by the Democrat Party and the Iron Triangle. It utilizes lessons and anecdotes from my life experiences in the Jim Crow South, in the Black church, as a correctional officer, leading civic organizations, and involvement in politics to illustrate these facts. It traces the origins and explains the rationale behind the Black community's fatal attraction to the oldest and most prolifically evil organization in history. It further explains how liberals have used this deadly infatuation to take over the Democrat Party and America.
This book explains why undermining Christianity and inciting racial discord between Black and White Christians is essential to Democrat Party survival. It explains why Democrat Party leadership believes the gospel of Jesus Christ is poisonous, racial reconciliation is catastrophic, and atheism is necessary. This book explains how their plans can be countered. It is a primer, designed to teach Conservatives how to communicate with a Democrat who has been indoctrinated with a lifetime of lies. This book teaches history, psychology, religion, philosophy and truth. So let's talk to and reason with our brothers and sisters in Christ, and our fellow countrymen. Then, lets dismantle this Iron Triangle and save America.


Review:
As soon as I started this I was pulled in and engaged by the arguments. The more I read the more my heart hurt for the terrible treatment of the black community in early America, continuing oppression after the Civil War, and economic oppression even to today. Jim Crow laws were enacted by white Southern Democrat-dominated state legislatures to disenfranchise and remove political and economic gains made by black people during the Reconstruction period after the Civil War. Even after the slaves were ‘supposedly’ given their freedom, they were oppressed by the ‘white master’. Prior to the war, plantation owners often used black bosses to manage the slaves and enforce the rules. They also allowed black churches with a trusted black minister/preacher who answered to the land owner. After the war, the white leaders continued to go to the black preachers as community leaders who would actually sell the votes of their congregation to the Democrat leaders.

The leaders mouthed promises or reassurances, but the policies continued to oppress the black community. Economic opportunities were denied to people of color and even after the passing of the Civil Rights Act in the 1960s, the situation of the black communities, particularly in Democrat led states, counties, and cities, failed to improve.

As Ellison points out, the policies of the liberal agenda (abortion, government welfare, and basic income programs, to name a few) are in opposition to Godly principles. Why would any true faith believers support such agendas? Why do the people continue to vote the liberal or Democrat party line that hasn't helped them in over 100 years? There is a mixture of conditioning, Stockholm Syndrome, untruthful media, and, (very disturbing to me) the betrayal and sell out by the black community leaders, both individually (church leaders) and in civic organizations. Look at many of the black leaders who have built their own wealth while doing little more than commiserating with their community members.

Many families lost the man as the head of the household and the mothers had to struggle to take care of their families. Children might leave school early to work or worse, to try to gain income through gang involvement. Government stepped in to take control of schools and to provide welfare programs which only led to further dependence on the leaders rather than providing a way out. Too many black communities are trapped in the cycles of poverty due to government aid rather than opportunity to succeed with education, trained skills and entrepreneurship. The young people are caught in gangs and violence instead of being given better education and a solid grounding in Christian values that would help them to find a way out of the poverty and violence cycles.

I assure you that I am not doing justice to the wealth of information and wisdom shared in this book. Mr. Ellison presents clear historical detail, current day examples, and logical arguments. I have sticky notes and turned pages (I didn’t have a marker handy) throughout the book. I think the book could have used a little tighter editing but that didn’t reduce the power of the arguments. Sadly, the bottom-line indicates a high level of corruption by those blinded by power who continue to mislead the faith based community I highly recommend this book to everyone who is willing to have an open view to seeing manipulation that has a serious impact on the lives of Christian African American and America society as a whole.


Source: Purchased in March 2021. This qualifies for 2021 Fiction and Print goals.
Posted by Martha Eskuchen at 11:12 PM