Audible Book Review: The Reaper, Autobiography of One of the Deadliest Special Ops Snipers, by Gary Brozek, Nicholas Irving

Nicholas Irving shares his years of sniper action in service of our military.
The Reaper
Autobiography of One of the Deadliest Special Ops Snipers
By: Gary Brozek, Nicholas Irving
Narrated by: Jeff Gurner 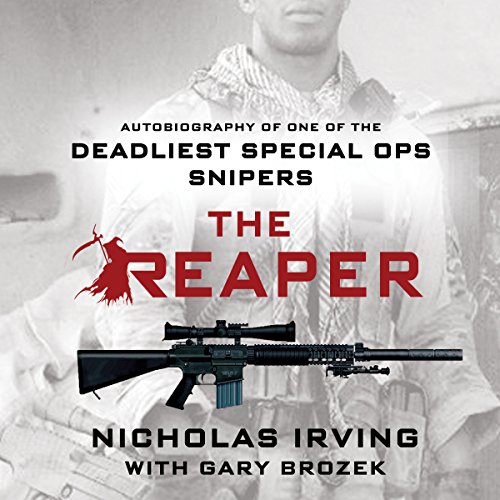 Publisher's Summary
Groundbreaking, thrilling and revealing, The Reaper is the astonishing memoir of Special Operations Direct Action Sniper Nicholas Irving, the 3rd Ranger Battalion's deadliest sniper with 33 confirmed kills, though his remarkable career total, including probables, is unknown. In the best-selling tradition of American Sniper and Shooter, Irving shares the true story of his extraordinary career, including his deployment to Afghanistan in the summer of 2009, when he set another record, this time for enemy kills on a single deployment. His teammates and chain of command labeled him "The Reaper," and his actions on the battlefield became the stuff of legend, culminating in an extraordinary face-off against an enemy sniper known simply as The Chechnian. Irving's astonishing first-person account of his development into an expert assassin offers a fascinating and extremely rare view of special operations combat missions through the eyes of a Ranger sniper during the Global War on Terrorism. From the brotherhood and sacrifice of teammates in battle to the cold reality of taking a life to protect another, no other audiobook dives so deeply inside the life of a sniper on point.
©2015 Nicholas Irving (P)2014 Macmillan Audio


Review:
Nicholas Irving was given his nickname, “The Reaper”, by other military men who heard of his skills and confirmed kills while protecting his teammates. He was rumored to have many more kills than were actual but he did have a good record especially after so many snipers had uneventful deployments. For Irving, a busy mission was a mixed blessing. Like many young soldiers he dreamed as a young boy of eventually becoming a soldier serving his country. He was only in his early 20s when he was a leader taking his team into enemy territory. On one hand many of the young men are eager to face the enemy, but Irving is mindful of each mate he is responsible for.

I enjoyed this autobiography which is written to be active and interesting. I found it amusing how Irving describes his special relationship with his equipment which is presented in a light way with a touch of self-deprecation. The entire book is presented with honest feelings addressing the relationships, including a dog and handler pair, developed and the reality of the dangers faced in hostile territory. I appreciated the intensity of the thoughts shared with minimal bad language. I recommend this to readers interested in the life of a military sniper.

Audio Notes: Jeff Gurner does a clear job with the narration. My only thought was that the accent didn’t really fit as Gurner appears to be an older white male narrating the thoughts and actions of a young black man. This detracted a bit from the reality of the biography.