I thought this was post-apocalyptic (which it is) but it is zombie type horror and survival.
Lost Valley
By: Walt Browning
Narrated by: Bronson Pinchot 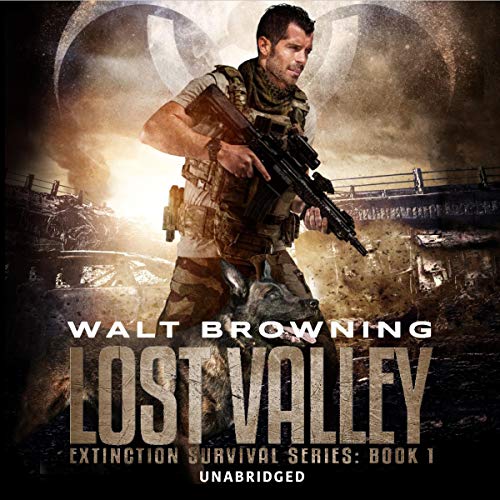 
Publisher's Summary
War has a way of following some people....
John Eric Carver and Shrek are a retired Navy SEAL war dog team, now living in the mountains outside of San Diego. Both man and dog thought their life was now settled, finding peace on the 40-acre ranch they had moved to. But life, and a mutated virus, changed all that.
Now, they have to survive a worldwide pandemic. Taking refuge in a nearby Boy Scout camp, he leads a group of teens and their parents as they are forced to deal with infected creatures that are rapidly consuming the world. Will John and Shrek survive another war, or will this be the end of the line for the SEAL team?
©2019 Walt Browning (P)2019 Blackstone Audio, Inc.


Review:
John Carver and his war dog Shrek have settled into a peaceful life after retiring from the Navy. He volunteers at a Boy Scout camp near his ranch. When an infection that turns people into ravenous cannibals strikes worldwide, John and Shrek are asked to help protect a group at the camp. The mutated virus is spreading quickly, and John is almost caught as he seeks to gather friends to take them to the camp.

The camp leaders are careful to inspect teens and parents as they seek refuge but they are still learning how the virus spreads… and how fast it works! A native teen from the reservation arrives on a motorbike only steps in front of an infected creature. She is able to join the camp and informs them that the infection is active in the coyotes as well as the humans. John and Shrek have been hunting a murderous coyote and now they know they will have to be even more careful.

John, another leader and a handful of teens have to make a run to a hospital to pick up medication. The risks are high but it is a necessary trip. Will they be successful to escape the infected and return to camp?

Browning is a new to me author and I found his writing direct with an easy flow. The plot and characters are well developed and the pacing worked well for a quick read. I likeed John and his dog Shrek, and also liked how the author shared a few chapters from Shrek’s view and the view of the rogue coyote. There is action as they face the infected and fight to escape from the mobs.

When I picked this out, I was looking more for a post-apocalyptic story rather than a zombie story. This would be a good story and series to read in October if, like me, you like your horror in that month. The story is entertaining, and I will likely listen to book two in October. I recommend this to fans of quick zombie-type survival tales.

Audio Notes: Bronson Pinchot is an effective narrator. He captures the voices of the characters (including the canines) and he shares appropriate emotions of fear and despair. I appreciate this was a free audio.


Source: September 2020 Audible Plus Catalog. This qualifies for 2021TBR and 2021Audiobook goals.
Posted by Martha Eskuchen at 11:33 PM