Pastor returned energized from a Pastors Conference. He started a new series titled “Rising”.
He noted that the world events distract our focus on God and our mission. We are to love God and love People – all people. We do not distinguish by birth, skin color, gender, status, achievements or anything else. We love all people and seek to bring all lost people to God.

Pastor mentioned that there are many books and movies that involve characters or societies that are shown rising up. He particularly described the movies of Rocky – Sylvester Stallone as a struggling boxer who rises to become a champion.

Often athletes swagger with their confidence. Is the church acting like a winner? The church is not in competition with other Christian churches but there is a competition against the enemy, Satan.

We go through storms like Hurricane Michael. We go through times of unrest like Covid19. Much of the turmoil is from the “seedy world of politics”. We have to be careful not to let that seep into our lives and relationships.

Churches loos people to four “D”s. We lose people to death, divorce, disagreement, dislocation, and Pastor added a 5th D: dumb stuff – that leads to disagreement. When the church is knocked down, it has to get back up, just like Rocky! We have the Champion of all!

Acts 27:13-44 and Acts 28:1-10 tells when Paul was a prisoner on a ship that was caught in a storm. The ship eventually wrecked but all the sailors and prisoners reached the shore safely. Paul was bitten by a snake and everyone thought he would die. But he survived. Then they believed he was a God.

Paul never stopped encouraging them to trust God. Their circumstances got worst but Paul’s confidence in God never changed. Paul knew he was going to appear before Caesar so he knew that he would not die on this trip. He used every opportunity to witness to God’s Grace! Paul was shipwrecked but he was never wrecked.

Like Paul, the church is the Championship team! The church is rising, not falling. We know that we WIN with God. The church is growing around the world, if not in America. We have to think and live like a champion.

The Point: We are a rising champion. That is who we are!

No matter what we face – hurricanes or pandemic – we are the body of Christ who is our risen champion. Pastor feels we have a damaged self-esteem. We don’t see our value as God sees it.

Our power comes for God. Authority to storm the gates of hell! It doesn’t matter how beat up you have been. Maybe we have forgotten how to win. Or actually – that we have already WON!
Believers will not be wrecked. Together we can take this territory for God.

Where is your work? Where are your 72 steps to train on? Goal to impact families! Time to get out of refuge, out of rehab and live like a Champion for God! It doesn't matter if we ran aground, lost the cargo or struggled. What matters is that we are rising champions!
God: Bind the enemy and loose the believers to share your word!


I found this new-to-me song while looking for a different song.

Verses for Today
Acts 27:21-26 NIV
21 After they had gone a long time without food, Paul stood up before them and said: “Men, you should have taken my advice not to sail from Crete; then you would have spared yourselves this damage and loss. 22 But now I urge you to keep up your courage, because not one of you will be lost; only the ship will be destroyed. 23 Last night an angel of the God to whom I belong and whom I serve stood beside me 24 and said, ‘Do not be afraid, Paul. You must stand trial before Caesar; and God has graciously given you the lives of all who sail with you.’ 25 So keep up your courage, men, for I have faith in God that it will happen just as he told me. 26 Nevertheless, we must run aground on some island.”

I pray, God, that you always remind me that I have authority in You and I am a champion with You! 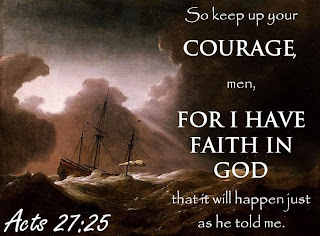 Posted by Martha Eskuchen at 11:44 AM