Audible Book Review: The Tales of Beedle the Bard by J.K. Rowling

This is nice but not as good as I had expected/hoped.
The Tales of Beedle the Bard
By: J.K. Rowling
Narrated by: Warwick Davis, Noma Dumezweni, Jason Isaacs, Jude Law, Evanna Lynch, Sally Mortemore, Bonnie Wright 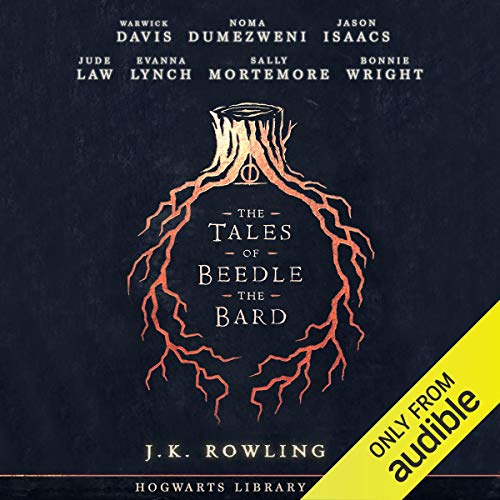 About This Audible Audiobook
Performed by talented actors from across the Wizarding World, this is the first ever audiobook edition of The Tales of Beedle the Bard, which was originally written in 2007 by J.K. Rowling and has raised money for her children's charity Lumos ever since.
As familiar to Hogwarts students as "Cinderella" and "Sleeping Beauty" are to Muggle children, Beedle's stories are a collection of popular fairy tales written for young witches and wizards. So, if you're wondering what's in store in this brand-new audio edition…well, your ears are in for a treat.
Once you've checked this fabulous Hogwarts Library book out, you'll start by hearing the author's introduction, read by Sally Mortemore (librarian Madam Pince from the Harry Potter films). Then it's time for the tales to begin…
• You'll laugh along to "The Wizard and the Hopping Pot" as you listen to the havoc wreaked by a father's impish gift to his son, read by Warwick Davis (Professor Flitwick—Harry Potter films).
• "The Fountain of Fair Fortune" will take you on a quest through an enchanted garden, alongside three witches and a luckless knight, read by Evanna Lynch (Luna Lovegood—Harry Potter films).
• In "The Warlock's Hairy Heart", you'll be warned about a young warlock who is fearful of love, and turns to dark magic to avoid it at all costs, read by Jason Isaacs (Lucius Malfoy—Harry Potter films).
• The calamitous meeting of a foolish king, a cunning charlatan and a mischievous washerwoman unravels in "Babbitty Rabbitty and her Cackling Stump", read by Bonnie Wright (Ginny Weasley—Harry Potter films).
• And finally, the most iconic of Beedle's stories. "The Tale of the Three Brothers"—with its message of humility and wisdom—will introduce you, dear listener, to the Deathly Hallows, read by Noma Dumezweni (Hermione Granger—Harry Potter and the Cursed Child, London's West End and New York's Broadway).
Each of the tales is accompanied by wise and whimsical notes from a certain Albus Dumbledore, surely everyone's favorite headmaster, read by Jude Law (Albus Dumbledore—Fantastic Beasts films).
We're told these five fables have been firm favorites in wizarding households for centuries, and now it's your turn to experience these tales from the Wizarding World, as you've never heard them before.
©2008 J.K. Rowling (P)2020 J.K. Rowling/Pottermore Publishing


Review:
I was looking forward to this as a revisit to creatures and possibly characters from the Harry Potter series. There are five new (though the themes aren’t new) fairytale stories which I did enjoy. I think my favorite was the first, "The Wizard and the Hopping Pot", both for its whimsy, irony and wisdom. The other stories themselves are okay.

Following each tale is a commentary by Albus Dumbledore – narrated by Jude Law. Although the commentary is a bit interesting, adding historical context, I found it dry and boring. I can’t imagine a child finding this engaging. Maybe I am not enough of an avid Potter fan, as I felt these parts of the short audio made it less interesting. It is a plus that sale proceeds go to what appears to be a worthy charity. But, frankly, I am glad I got the book for free. I am sure diehard fans will want to read this.

Audio Notes: I liked the various narrators and the sound effects. Those added to the audio for me and made it an easier listen.