This is an easy listen mystery with romance. 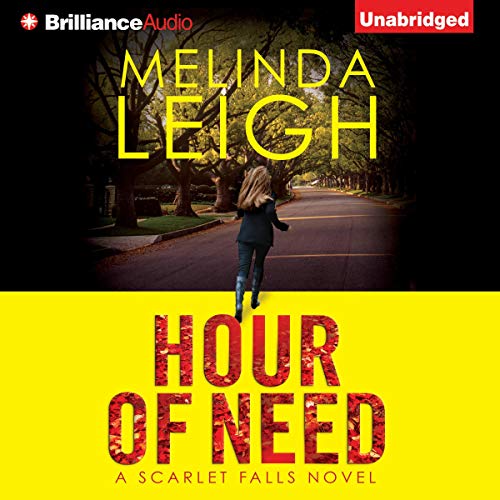 Publisher's Summary
A 2015 Daphne du Maurier Award finalist from Wall Street Journal bestselling author Melinda Leigh.
While fighting in Afghanistan, Major Grant Barrett receives devastating news: his brother and sister-in-law have been murdered in Scarlet Falls, the sleepy suburb of Grant’s youth. Emotionally scarred from war, the career soldier returns home on emergency leave to temporarily care for his orphaned nephew and niece. But when someone tries to kidnap the kids and their teenage babysitter, Grant knows it’s not a random act…and neither were the murders.
Already devastated by her neighbors’ violent deaths, Ellie Ross is shattered by the attempted abduction of her teenage daughter so she desperately turns to Grant for help. As they navigate a deadly search for the truth, they struggle with growing feelings for each other and Grant’s impending return to Afghanistan.
But time is running out. The killer is growing bolder by the hour, and Ellie and Grant must find him before the children become his next victims.
Bestselling author Melinda Leigh delivers another gritty mystery simmering with spine-tingling passion in this first Scarlet Falls novel.
©2014 Melinda Leigh (P)2014 Brilliance Audio, all rights reserved


Review:
Major Grant Barrett is given emergency leave to return home after his brother, Lee, and sister-in-law, Kate, are murdered in the streets of Scarlet Falls. Grant needs to take charge of his orphaned six-year-old nephew, Carson, and 4-months-old, colicky niece, Faith. He is relieved to have the help from his neighbors, Ellie Ross, her mother and her teenage daughter, Julia.

Ellie is a legal assistant who worked for Lee and she is aware that Lee had taken on a controversial civil case. The case was the result of a suicide of a high school student involved in an ice-skating club who was allegedly being mercilessly bullied by two other girls on the skate team. The managing partner at the firm directs Ellie to find the case file, and any others that Lee had at home, and bring them back to the office. Before Ellie gets a chance to try to gather the office files, she is accosted by a man with a gun who threatens to kill her mother and daughter if Ellie doesn’t deliver the civil case file to the blackmailer. Ellie would like to trust Grant with her secret but she is too afraid to risk her family.

Grant and his high finance lawyer sister, Hannah, are staying at Lee’s home with the children, while a third brother/Uncle Mac, floats in and out to help. The group is not aware that the house is under surveillance until Grant comes home to find the house ransacked. A few days later a man tries to kidnap Carson while Julia is with the children at the park. Now Grant is determined to uncover Ellie’s secrets and to track down his brother’s murderer.

Grant and Ellie are drawn to each other but are reluctant to indulge their attraction since he is a career military man expected to return to Afghanistan within a month. She has experienced abandonment in her youth and doesn’t want to put herself or her daughter through that loss. Still, Grant and Ellie find themselves seeking comfort as they try to keep their families alive and safe.

This is what I consider an easy romantic suspense. I was glad to listen to this as a change to the sci fi genre which I have been into. The story is not heavy on action although Grant does get a chance to show off some of his soldiering skills. The bullying issue is sad, and the crime has some good twists. I enjoyed the mix of family, mystery, and not too heavy romance. I would read more by Ms. Leigh and I recommend this to fans of mystery romance.

Audio Notes: I think this is my first experience with Cris Dukehart as a narrator although she appears to be a prolific narrator. I enjoyed her clear, skilled presentation. She provides distinct voices and inflection fitting the scenes. The narration enhanced my enjoyment of the story.