This is a high action and I love Cody, the former war dog.
Vigilante Assassin: An Action Thriller
(Jake Wolfe Book 2)
by Mark Nolan 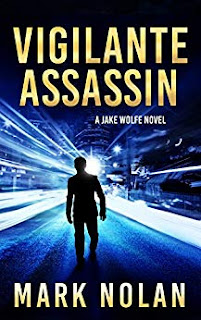 Every marriage has a secret, and this one is deadly. Lauren Stephens wakes up to find her husband, Gene, has vanished during the night. His phone is dead. Desperate, she hires Jake Wolfe and his war dog, Cody. They search the house and discover something so disturbing that Jake won’t allow Lauren near it. “No, if you see this, there is no unseeing it.”
Lauren thought she had it all: a loving partner, two great kids, a successful business, and a beautiful home in the San Francisco hills. But all of that is about to come crashing down, due to a missing husband, a hidden past, and a frightening secret that will shock a trusting wife to the core. Gene has enemies, and now they want something from Lauren.
Jake Wolfe is a flawed man who has a habit of being in the wrong place at the wrong time. He wants to leave his secret, violent past behind him, but when Lauren and her children are threatened, his protective instinct takes command. Jake soon finds himself involved in a dangerous conspiracy, targeted for death, and engaged in battle with a powerful, unseen group who will stop at nothing to get what they want.
Jake’s going to have to think fast and fight hard to protect Cody, Lauren and her kids.


Review:
Jake is contemplating peace and quiet as he relaxes on his friend’s boat with his new girlfriend, Sarah. He wakes early and his retired war dog, Cody, warns him of danger in the water. The sun hasn’t even risen as Jake faces the first attack of the day.

As soon as Jake docks, the head of an executive security company appears to ask for his help to protect Lauren Stephens, a wealthy woman whose husband has just gone missing. Soon Jake locates a body in a secret room and discovers dangerous, scandalous secrets. Jake dodges weaponized drones as he begins to hunt for a motive and a killer.

Jake can’t even get to breakfast before he is stopped by a cop who resents Jake. Jake ends up with a head lump and wakes up in jail facing a sexual predator. Jake calls in a government agency to help him get out of jail quickly. The government people will be glad for this extra leverage to get Jake to sign on to their special project(s).

The excitement continues with multiple kidnappings, another beating and Jake facing death threats by a powerful, mysterious enemy. In addition to finding Mr. Stephens’ killer, Jake and his long-time detective friend, Terrell, are tracking drug and arms dealers. While rushing from one danger to another Jake is intent on protecting Lauren and her kids, as well as protecting Sarah and Cody. Jake is even willing to risk teaming up with the mob in order to get quick, on the street help.

Wow! This is packed with high octane action! It reminded me of the TV show 24 with all the things that go in such a short time. Jake and Cody are at the center of all the action and Cody shines with his brilliant nose work. Cody’s skills and complex character are almost on level with Jake’s. The story reads very quickly as the mysteries and danger twists and turns.

This is the second in the series and I do recommend reading the first book, Dead Lawyer’s Don’t Lie. That book introduces the primary characters and explains their backgrounds. I am very glad that I have book three to read soon. I recommend this series to readers who enjoy fast paced action with an extra smart dog as a great partner.