This was a pleasant surprise (and might lead to more monthly titles).
April's Desires (Larry Macklin Mysteries Book 6)
by A. E. Howe 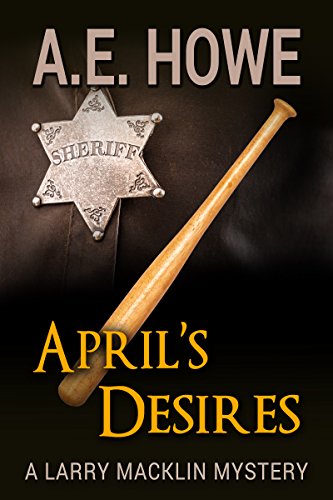 The peace of spring is shattered for criminal investigator Larry Macklin when his best friend, Pete Henley, is accused of brutally killing his daughter’s ex-boyfriend. Larry knows that Pete is innocent, but the evidence is heavily weighted against him.
Before Larry can even begin to clear Pete’s name, he is pulled off of the case to investigate a another murder where the prime suspect is the local chief of police. As Larry investigates the latest death, it soon becomes clear that the murders may be related, part of a string of killings stretching back almost two decades.
In order to solve the case, Larry will have to risk everything he holds dear—his ethics, his friendships, his loyalty to the sheriff’s department… and his life.


Review:
Larry is a small town criminal investigator working in the Sheriff’s office which is led by his father. Larry, and the Sheriff’s office, are struggling to maintain impartiality as they investigate the murder of a young man who was almost attacked by Larry’s best friend, Pete, the day before. Larry is certain Pete is innocent, but circumstances imply trouble and now there is evidence that is likely planted but very damaging. What to do?

Just as the investigation to the young man’s death is gearing up, Larry is pulled to investigate the murder of a crabby old lady who is neighbor to the local chief of police, a man who is antagonistically challenging Larry’s father for Sheriff. There are some similarities in the crimes and Larry’s gut is hinting there is a connection.

The cases become even more complicated when the boy’s mother hires a former Texas Ranger to investigate for the family. The former Ranger seems to be hiding secrets and he ends up dead when Larry is about to meet with him for information.

The cases are putting Larry’s life, career and ethics on the line. Can he get the murders solved before his missteps are exposed or worse, before another officer winds up dead?

This reads very easily from the outset. I really liked the primary characters who are developed with real to life issues, emotions and challenges. The mysteries are well developed with twists and turns. I also enjoyed the fact that the story is set in North Florida not too far from where I live. The county is fictional but it is near cities I am familiar with.

Although this read fine stepping in at book six in the series, it made me interested in the earlier books. There are monthly titles so I may read more. I recommend this to readers who enjoy a fast paced, well written who-done-it mystery.