This is a fun paranormal battle adventure listen. 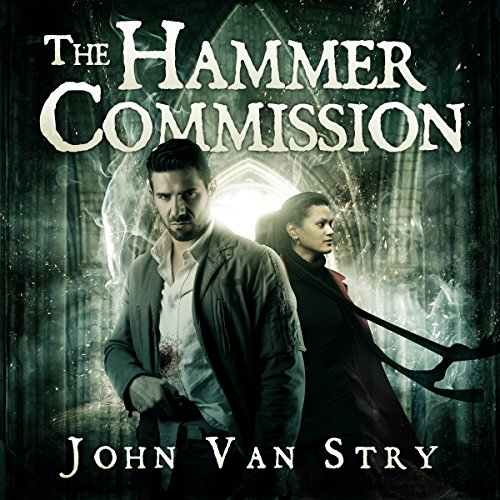 Publisher's Summary
Mark just watched his partner and best friend of 10 years torn limb from limb by the kind of unholy horror that leaves most people gibbering in terror. Only a combination of luck and skill kept Mark from sharing his partner's fate and being killed by an abomination that by rights shouldn't exist in this day and age.
When asked, Mark tells people he works recovering stolen artifacts, and that's true. However he's also a member of a very old and secret organization that protects the world from devils and demons summoned here to do evil. A foot soldier on the front lines of the eternal war between Heaven and Hell, things had been favoring the side of Heaven for some time now. Until today that is, when someone discovered how to summon a devil that no one had seen since WWII.
Never popular with his boss, Mark finds himself sidelined as he tries to discover just what happened. Upset with being taken off the case, Mark does discover one thing rather quickly: whoever is behind this is now after him, and if he's not careful he'll be joining his partner sooner, rather than later.
©2013 John Van Stry (P)2017 John Van Stry


Review:
Mark loses his partner and best friend to a brutal demon attack. Mark and Jake have been part of a secret force that battles devils and demons on behalf of the church to protect innocents worldwide. Mark barely avoids death against this demon that shouldn’t exist. Mark awakens from his injuries and is determined to investigate who is summoning strange demons. But rather than getting to hunt down the source of the demon, Mark is directed by Father Flores, with whom he is at odds, to take a leave of absence.

Mark has also been told to select a new partner. He knows he is in trouble when the only applicant provided is a woman whose bad luck or stumbling has caused the death of her last several law enforcement partners. Mark doesn’t want to endanger the newbie, Judith, but she won’t stay behind when he sets out to investigate, even without authority.

Mark and Judith visit scenes where other hunting teams have been killed. He then takes Judith to visit his family (where there are secrets and surprises) and then to visit another friend with more surprises. Along the way, Judith is getting a crash course of fighting enemies with prayers, holy water and crosses rather than tasers and bullets. The attacks are coming more frequently, and it soon becomes clear that Mark is being targeted. Mark gets more suspicious as he questions how they are tracking him. Finally, Mark takes the investigation back to his home base to try to pin down clues.

I enjoy monster hunting genre and this one had my interest as the commission are fighting for heaven. Unknown to the public at large, the world includes creatures like vampires and shifters, not all of whom are evil. I enjoyed the various characters and the many action battles. I did suspect the villain and liked how the clues lead Mark to uncover the truth. There was a little bit of language (too bad) and sexual activity behind doors. Still, I liked how the story centers on faith and the battle against evil. I found the story engaging (although not as strong as Monster Hunters International). I’d be willing to pick up additional sequels in this seriesfor an easy, fun listen.

Audio Notes: Doug Tisdale Jr. does a good job with the narration. Some of the voice accents are a lot of fun which adds to the entertainment. I enjoyed the audio experience which helped the story move along quickly.