This continues the fun Mercy Thompson entertainment with werewolves, vampires and witches…Oh My! 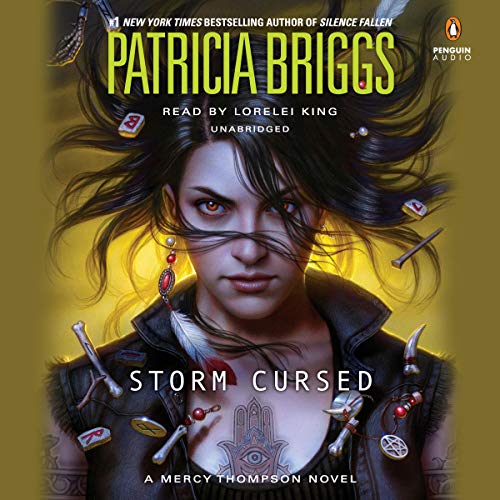 Publisher's Summary
In this powerful entry in the number-one New York Times best-selling series, Mercy Thompson must face a deadly enemy to defend all she loves....
My name is Mercedes Athena Thompson Hauptman, and I am a car mechanic.
And a coyote shape-shifter.
And the mate of the Alpha of the Columbia Basin werewolf pack.
Even so, none of that would have gotten me into trouble if, a few months ago, I hadn’t stood upon a bridge and taken responsibility for the safety of the citizens who live in our territory. It seemed like the thing to do at the time. It should have only involved hunting down killer goblins, zombie goats, and an occasional troll. Instead, our home was viewed as neutral ground, a place where humans would feel safe to come and interact with the fae.
The reality is that nothing and no one is safe. As generals and politicians face off with the Gray Lords of the fae, a storm is coming, and her name is Death.
But we are pack, and we have given our word.
We will die to keep it.
©2019 Patricia Briggs (P)2019 Penguin Audio


Review:
Mercy has declared the Tri-City area as a safe place for the fae. The government and the Grey Lords, fae leadership, are seeking to meet to work out some guidelines for normal humans and the fae creatures to live safely beside each other. The meeting is to take place in Mercy’s hometown with Mercy’s mate, Adam, and the werewolf pack members providing security. Considering her unique relationship with the fae, Mercy has been recruited (directed) to participate by arranging a safe location.

While the joint meeting is barely being discussed, Mercy is called upon to help deal with some strange community incidents. Mercy faces a rogue, killer goblin and next she has to deal with zombie miniature goats. Mercy gets help from appropriate allies, like Larry the Goblin King and a new pack member, Sherwood, who brings some surprising skills to bare when faced with black magic. The zombie goats are determined to be the work of an invading witch group.

Mercy and Sherwood go to check on the local witches and discover tragedy and horror. They find one survivor, a nearly dead kitten. Mercy and Ben save Adam and a small group of government officials from a bomb. When a curse attack against Mercy is accidentally discovered at her garage, it becomes clear that the enemy witches, including one called “death”, are not only trying to take control in the community, but they want to block Mercy and the joint meeting. Dangers escalate and Mercy seeks the aid of her fae friends, Zee and Tad, and even the wildly instable vampire, Wolfe, to take on the black witches and the minion zombie army they have created.

This is a series that keeps on providing strong entertainment through strong characters and engaging plots. The relationship between Mercy and the werewolf pack is always interesting. Of course, her bond with her mate Adam is particularly well done. The black magic in this story creates a dark tone with evil and death putting a bit of a damper on Mercy’s usual snappy humor. I enjoyed the cameo touch with Mercy’s family, Coyote and Mercy’s brother. I also liked the unique zombie creatures and the surprise connection that appears during the battle. I wasn’t overwhelmed with this episode, but it maintains the entertainment level of the series for me. I recommend the whole series and suggest starting at the beginning for full enjoyment.

Audio Notes: I’ve probably said it before, but Lorelei King is the gifted narrator for this series. She has unique voices for the characters and brings the right emotion and energy to the story. She even captures the darker mood of this story. It is a pleasure to listen to this series on audio.