Audible Book Review: The Wizards of Once by Cressida Cowell

This is a fun, fantasy adventure for kids and adults.

The Wizards of Once
By: Cressida Cowell
Narrated by: David Tennant 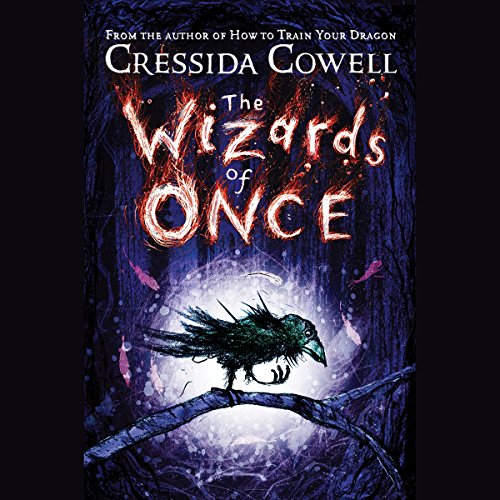 Publisher's Summary
In the first book of a new series by the internationally best-selling author of How to Train Your Dragon, the warring worlds of Wizards and Warriors collide in a thrilling and enchanting adventure.
Once there were Wizards, who were Magic, and Warriors, who were not. But Xar, son of the King of Wizards, can't cast a single spell. And Wish, daughter of the Warrior Queen, has a banned magical object of her own. When they collide in the wildwood, on the trail of a deadly witch, it's the start of a grand adventure that just might change the fabric of their worlds.
With Cressida Cowell's trademark wit and the same stunning combination of action, adventure, humor, and heart that made How to Train Your Dragon a beloved best-selling franchise, The Wizards of Once will transport and enchant listeners.
©2017 Cressida Cowell (P)2017 Hachette Audio


Review:
Xar, son of a Wizard, shows no magical ability although he is of an age to have come into those skills. Across the woods and the wall is Wish, the clumsy daughter of the Warrior Queen who has banned magical objects. Wish has suddenly obtained a magical spoon and, more alarmingly, she has acquired a magical sword which indicates it was formerly used to kill witches.

Xar wants to find a way to impress his father. He takes some of his friends into the wildwood to hunt for witches. Xar’s many companions include a slow, sweet giant, Crusher, a wise raven, Caliburn, and squeaky sprite, Squeezjoos. Most of his friends have tried to talk Xar out of this adventure because witches are supposed to be dead and they are in danger of coming across Warriors.

Wish likes to visit the woods to get away from the disappointed frowns and remarks of her mother. She takes along her grumbling and frustrated guard and a new ‘friend’, a talking spoon. She also has spirited away from the fort a special magical, therefore forbidden, sword.

Wish and Xar stumble on each other in the wildwood. Wish gets captured by Xar who steals the sword. Xar causes Wish to remain overnight at the Wizard camp but later Xar follows Wish back to the Warrior Fort. Their confrontation results in a reluctant friendship where they have to work together learning dark secrets of the Warrior Queen and facing dangers as they escape the Queen’s dungeons.

I was pulled in right away by the likeable fantasy characters. The story is told by a character who remains unidentified, challenging the reader to guess who it is. The writing style creates fun characters and an engaging story. This is an lively adventure that should delight children but can be enjoyed by adults too. There is disobedience which isn’t good and gets the kids into trouble. But there is also a fine underlying message about accepting your own talents or lack thereof and learning to work around them… especially with the help of friends. I enjoyed watching How to Train Your Dragon and I recommend this to readers who liked those stories and like fun adventure. Although I was delighted by the audiobook, I encourage parents to “look inside” and see the very cute illustrations.

Audio Notes: David Tennant does a wonderful job with the narration. He provides good voices for the different characters and imbues them with fun and feeling. The audio contributed to my enjoyment of the story.