This is a page-turner thriller with full on action and a good dose of humor. 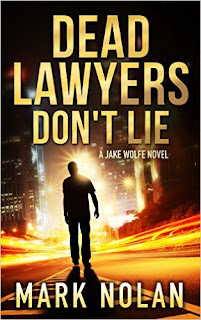 A mysterious killer who calls himself The Artist is assassinating wealthy lawyers in San Francisco. When war veteran Jake Wolfe accidentally takes his picture during a murder, The Artist adds Jake to his kill list and he becomes a target in a deadly game of cat and mouse that only one of them can survive. How far would you go to protect your loved ones from a killer? Jake wants to leave his secret, violent past life behind him. But the reluctant, flawed hero can't ignore his duty and his personal moral compass.
This gripping thriller is full of suspense, plot twists and surprises. It features a cast of interesting characters, including several strong-willed women, two wise-cracking San Francisco Police Homicide Inspectors, one highly intelligent dog, and a philosophical killer who shares Jake's admiration for Van Gogh paintings but still plans to kill him anyway. As Jake gets closer to unraveling a merciless conspiracy, his life gets turned upside down and the danger level increases, adding to the growing suspense. This entertaining page-turner starts out as a murder mystery and then shifts gears into a high-speed action thriller that takes you on a roller-coaster ride to the riveting ending. A good read for those who enjoy mysteries, suspense, action and adventure, vigilante justice, unique characters, witty dialogue and a little romance too. Now on sale in over a dozen countries around the world. Be the first among your friends to read it.


Review:
Jake Wolfe, a former Marine, is now an investigative, photo journalist. He is a tough veteran who still carries the protective mode for those in need or distress. He was a dog handler in the service and realizes he must help a military dog who has PTSD and is distraught when the another former Marine friend of Jake's is buried. Now he has Cody as a constant companion which eventually brings him into contact with a lovely, but beleaguered, veterinarian, Sarah.

Jake’s best friend, Terrell, a former Infantry Rifleman, is now a Police Homicide Inspector with the San Francisco Police Department. When Jake witnesses a sniper murder of a local attorney he quickly texts Terrell who heads up the investigation. Jake is never far away and will need Terrell to have his back since he has become a target for the sniper, “The Artist”.

The Artist takes pride in planning unique and precise hits. He has gained renown for his skills but knows that some of his employers consider him replaceable. But he will prove them wrong, as long as his manic swings don’t push him into making a mistake.

The banter between Jake and Terrell reminded me of the super fun dialog between 'Riggs' (Mel Gibson) and Roger (Danny Glover) in the 1987 Lethal Weapon series. Mark Nolan does a great job creating all of these characters: Jake, Terrell, The Artist, Sarah and even the crazed officer, Denton, who wants to remove Jake from her world. I enjoyed how Nolan used humor to ease difficult situations.

I was really surprised at the wide range of topics the author covered including corporate corruption, police jealousies, PTSD, cancer and pregnancy, military dogs and more. At one point I thought there might have been too much in one story but it all worked in the plot plan. Nolan uses the story development to reveal Jake’s talents, connections and skills that make him the one man who might be able to stop The Artist. There were several good twists and I loved the intense, non-stop action. The writing could use a sharp editing but still the package and pacing kept the book moving along with good entertainment. Anyone who enjoys a fast paced, murder chase thriller should make a point to read this one. I hope to read more adventures for Jake, Cody and Terrell.


I received this ebook from the author for an honest review.
Posted by Martha Eskuchen at 9:40 PM