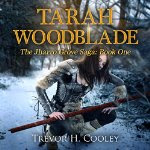 Publisher's Summary
The war is over, but there is a void of power that must be filled and no shortage of souls eager to fill it.
Tarah Woodblade was the best guide and tracker in the land, but she ran away from the war. She returns to Dremaldria expecting to be labeled a coward, but finds herself lauded as a hero. It seems a hero is needed too, because someone is hunting rogue horses....
©2013, 2015 Trevor H. Cooley (P)2016 Trevor H. Cooley


Review:
Tarah Woodblade drags herself back to her home town expecting to be scorned because she ran when war broke out. She is surprised when she is hailed as a hero. After all she did lead many people to safety that fateful night before she disappeared. Now she just has to reconcile with her own guilt.

Before she can even make it to her off the path home, she is pulled in for a new assignment. The local guild hires her to work for them to track rogue horses. Tarah is one of the best trackers around even though she carefully hides the secret of her success.

Rogue horses are not really horses. Well, parts of them might be. But other parts are gorilla or lion or unicorn or many other creatures. They are rogue because they have been constructed by the magic of a fierce magician who is no longer around to create more. The few rogue horses still hiding possess great power and are extremely valuable for more reasons than suspected. Tarah is more than willing to track these wondrous creatures to try to get them away from the bandit dwarves who are selling them knowing they will be slaughtered.

Tarah is teamed with Djeri (Jerry with a D) and neither is thrilled with the teaming at first. But as they move forward they begin to recognize and appreciate each other’s skills. I enjoyed how their reluctant pairing grew to a caring team. Djeri stands by Tarah and supports her as she faces current danger and trauma and deals with the dark emotions of her past. Most important, he believes in her and helps her change her attitude.

Tarah is an annoying character at first. It is clear she has spent a lot of time alone as she is constantly speaking to herself within her head. She especially repeats dialogue from her steady and logical father which is offset by the crafty strengths of her grandfather. I enjoyed how Mr. Cooley ‘grew’ Tarah’s character through the book. I really liked her tracking skills and the fighting skills of both Tarah and Djeri which were displayed through plenty of action.

Tarah Woodblade is the 6th book in the Bowl of Souls series but the first in The Jharro Grove Saga. I was worried about coming in at the 6th in a series but the book stands well on its own. There was enough backstory that I felt I got a sense of some of the adventures that must be covered in the earlier books. There are moonrats whose queen was apparently killed by Tarah. But the spirit or essence of the queen lives on in a bizarre location. There are nasty wizards and dwarves who are a threat to the horses and a threat to Tarah and Djeri.

This is good fantasy with magic, dwarves, gnomes, and an assortment of creatures. I would definitely be interested in reading or listening to more in the series as this was fun and engaging.

Audio Notes: Andrew Tell did an excellent job with this narration. He provided different voice accents and emotional levels that fit the characters, even the female protagonist. His narration was clear and flowed well. It added to my enjoyment of the story.

I received this audio title from the narrator through AudioBook Boom for an honest review. It qualifies toward my 2016 Audio Challenge.
Posted by Martha Eskuchen at 10:02 PM