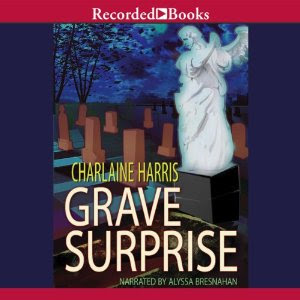 Publisher's Summary
Twenty-something Harper Connelly has a gift. After being struck by lighting as a child, she discovered an eerie ability to locate the deceased.
In Memphis, skeptical Professor Nunley wants her to demonstrate her skill at an ancient cemetery. There, Harper stands atop a grave and says there are two bodies entombed: one centuries old, but the other, a young girl named Tabitha.
Her assertion holds water. Tabitha has been missing for two years - and now the police are suspicious of Harper. So with her loyal stepbrother, Tolliver, Harper begins to amass clues that will solve the case.
©2006 Charlaine Harris Inc; (P)2007 Recorded Books


Review:
Harper Connelly was struck by lightning as a child and survived with a special ‘gift’. She can locate the dead by feel of the ground or burial spot and she can identify the cause of death – natural or unnatural. She might be able to say how a victim died but that doesn’t tell her who perpetrated the murder. Although it isn’t easy, her skills provide a career in which she is aided by her loyal stepbrother Tolliver.

Harper is challenged by a jeering college professor to show her skills to his special class. The professor becomes angry and the class is surprised as Harper successfully identifies one death after another in the old Memphis cemetery. Then Harper is shocked when she stands on a grave that reveals a child she was seeking a year before. Harper had been engaged by the parents to find the missing little girl but with few clues she was unsuccessful.

Harper and Tolliver have to deal with local and FBI authorities who look suspect at them. They also have to meet with the family members who have a range of reactions to the discovery of the body. Harper has to dig through the clues to find out how the child was buried in a different city and why events were manipulated so that she would find the body.

I liked the thought processes shared for Harper who is a well-developed, engaging character. Her relationship with her stepbrother, already an important element which affects them both, appears to be poised for a change. The skeptics are fully represented and the suspects are lined up as Ms. Harris skillfully lays out the clues to the mystery. This is different than the Sookie Stackhouse series but enjoyable for the mystery and psychic elements.

This was an easy, fairly quick listen. I would read more in this series. It was very enjoyable and I recommend it to mystery lovers who enjoy a touch of psychic with their clues.

Audio Notes: It took me a little time to get used to the narration by Alyssa Bresnahan. It seemed rather low-key initially but as it proceeded I felt the voices and subdued tone fit the spooky elements of the story. I was glad to have this in audio format for quick reading/listening.


This is from my Audible Library - 2012. This qualifies for my TBR and Audio Challenges and "G" in Alphabet Challenge.
Posted by Martha Eskuchen at 6:45 PM