This is wonderful fiction based on real life Civil War documents and people.

FRIENDS OF THE WIGWAM: A Civil War Story
by John William Huelskamp 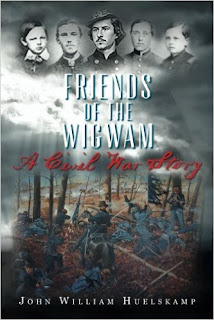 FRIENDS OF THE WIGWAM is a historical novel and love story about six young friends whose innocence is stripped from them seemingly overnight in the brutal setting of the American Civil War.
Meticulously researched and based on real-life people and true events, FRIENDS OF THE WIGWAM spans 1857-1865 and introduces you to the courageous men and women from Illinois who staged one of the first contested national conventions, were responsible for getting Abraham Lincoln elected and made the ultimate sacrifice during the American Civil War.
From the true story of a young woman who successfully masqueraded as a man during the Civil War and was buried with full military honors to the often heart-wrenching letters home to wives and families and actual military correspondence between military leaders, author John William Huelskamp brings to life a volatile nation at war.
Celebrate each friend's successes and struggles on the battlefields, learn the story of those who led the battles, and meet a magnificent war-horse that is a steadfast survivor in the face of many tragedies.
Without a doubt, FRIENDS OF THE WIGWAM is one of the most moving Civil War novels you will ever read.
*** A WGN Emmy Award nominee news video on this fascinating Civil War novel can be viewed at friendsofthewigwam.com***


Review:
Will and Aaron are teen friends in Freeport, Illinois. One summer they find an old Indian cave along the bank of their favorite river and they pledge to always be “Friends of the Wigwam.” Allie, a tomboy finds the cave and she and her friend, Jennie, a daughter of a wealthy family, soon join the Friends. They are joined by two other local boys who fish and hunt in the woods. The friends share fun, pranks, growth and young love by the river until the time comes to go to war.

Several local men gather in support of Lincoln, first as he runs for Senator and later when he runs for President. There are also men who are clear opponents. Several of these men go on to become significant officers in the war.

The author uses actual diary entries and letters to create a remarkable view of the personable lives of these individuals as they all become involved in the tragedies of the war. Some will return, and friends will remember those who do not. The dialogue is natural and the descriptions are beautiful in peace and chillingly detailed during battle. The entire package makes the events come alive.

I was impressed by the deep love and feelings expressed in the real letters of the Union officers.
Copies of the letters are included as well as images of buildings and sketches of battle scenes. At the end of the story the author lists the real ‘characters’ and what happened to them as best the records reflect. I highly recommend this to readers who enjoy Civil War stories.


I received this print book through The Cadence Group for an honest review.
Posted by Martha Eskuchen at 8:38 PM