Book Review: The Forever Gate Book One by Isaac Hooke

This is an engaging introduction to the series.

The Forever Gate Book One
by Isaac Hooke 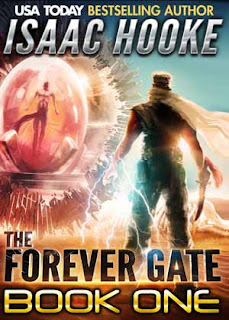 The world as we know it is about to end.
Hoodwink Cooper has been sentenced to death. His crime? Attempting to blast a hole in the Forever Gate, the colossal wall that surrounds the city and protects the denizens from the uninhabitable Outside. There's only one problem - he isn't the one who planted the bomb.
His daughter did, at the behest of a secretive society known as the Users.
As the gols, the humanlike automata who have enslaved the humans, prepare to carry out Hoodwink's sentence, the Users plot even greater turmoil. If Hoodwink gives up the ghost without first extricating his daughter from their clutches, she will most likely join him in the afterlife.
What Hoodwink and the Users don't realize is that they are all pawns in a greater game whose stakes are the very survival of humanity itself.
Will Hoodwink escape in time to save his daughter? More importantly, will he break free of the invisible forces that guide him?
Or will he succumb to the domination of his unseen masters and cause the breaking of the world, losing not just his daughter, but everything?
---THE FOREVER GATE combines elements of science fiction & fantasy to evoke a unique setting entirely unlike anything you've ever read before.


Review:
Hoodwink has been sentenced to death for threatening the Forever Gate. His accusers do not know that he accepted the crime and punishment to protect his daughter. He does not know why she wanted to bomb the forbidden gate but he will do anything, even die, to save her.

Yolinda, now Ari, is working with a secret group of people who are no longer shackled by the collars that prevent most citizens from using super powers of fire and electricity. Since they can still use the powers they are called the Users. A team rescue Hoodwink from the executioner’s blade and steer him to the outskirts of town. There he is given a choice: return for his punishment or climb the forbidden wall.

Hoodwink accepts the task and promises to come back to his daughter. That is a promise he may not be able to keep. Once he passes over the wall he meets a dwarf who is mysterious and dangerous. Hoodwink appears to be captured, maybe killed. But he awakens to find himself in a layered world under the control of others whose motives are unknown.

The story is set in a future world that has a feel of the middle ages. There are gols who are not human but rather government-controlled workers. Hoodwink lost his daughter to the Mayor and has had to learn to live with his guilt. The layered worlds had me thinking of the body pods in the Matrix. I enjoyed the creative world and I enjoyed the action. Hoodwink is a likeable, strong character – maybe not completely good but with a renewed integrity that seeks to protect those he loves. The ending has an "argh" moment and left me curious to discover where the story goes from here. I am glad that I have the next books.


I received this book and some of the sequels from the author for an honest review.
I actually had this in my Kindle Library from 2014 so I am counting it towards TBR Challenge also.
Posted by Martha Eskuchen at 10:49 PM