I felt this story raised more questions than it answered.
Second Chances - A "Chosen" Short Story
by Jeff Altabef and Erynn Altabef 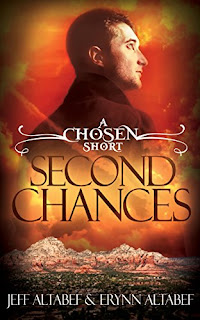 Precious and rare, second chances must be earned, but has Ayden done enough to win his?
[Short Story, Teen & Young Adult, Mystery and Thriller, Fantasy and Supernatural, American Indian Culture]
One night changes everything.
One chance meeting forces a young man to make a choice.
Will he do what’s right?
Or what’s easy?
Ayden is forced to remember old secrets he’d rather not reveal when his daughter returns home with questions about his shadowy past and dangerous legacy. Will she understand when he tells her about the night mysterious strangers came to his sleepy Arizona town looking for a local medicine man?
As his tale unfolds, Ayden pieces together the mystery that connected a recent murder, the strangers, and the medicine man’s bizarre behavior.
Will he allow old demons to rule him, or will he get a second chance?


Review:
Juliet is a teen who has always wondered about her father. Her mother refused to give any information but she has finally met him and demands that he explain his absence from her life.

Ayden had a rough childhood and ended up as a part of a gang. He had every intention of giving up his past and going straight so he could marry the girl he loved, the daughter of a rich man in town. Ayden hears strangers in town asking about a local medicine man and about his girl’s father. When he races off to warn them he stumbles onto a dark man with evil powers. Unexpected events that no one will believe, especially with his history, put Ayden in jail and out of his daughter's life for many years.

Her father’s tale of events helps Juliet to understand more about herself. Now she has to face a future knowing she has special abilities and enemies to find.

I am not sure if this is a ‘prequel’ or a short story between full books in the series. It is short at 74 pages and barely introduces the primary characters and mysterious legend, supernatural powers and evils that are involved. I felt sorry for Ayden who made some bad choices and got trapped by outside powers. I didn’t care for Juliet’s attitude of rebellion and disobedience. I liked the suspense and Native American mystery elements.

Although this serves as an introduction, I felt it was incomplete on its own. I didn’t feel I understood what was to happen when I finished the short story. I suspect it would make sense once the reader moves on to the first full book in the series but I really was left puzzling whether this had pulled me in enough to want to continue. I might be willing to read the next book if it was offered for review but I can’t say I was engaged enough to want to run out and buy it.


I received this book from the author in exchange for signing up for the newsletter. No review was required although encouraged.
Posted by Martha Eskuchen at 10:39 PM