This is great entertainment with good characters, conflict and creativity.
Haraken: A Silver Ships Novel
By: S. H. Jucha
Read by: Grover Gardner 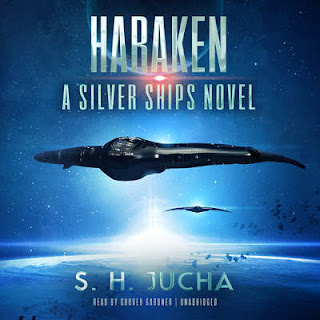 Nine years of tranquility came to an abrupt end when a Méridien starship entered the Hellébore system, sounding a dire warning for Alex Racine, the Haraken president. Unwanted visitors had arrived again. But this time, they’re not alien; they’re human. Claiming to have followed the course of a colony ship launched a millennium ago when Earth wrestled with resource wars and climate change, the mission commander, Antonio García, requests a meeting with the planet’s leaders. The Earthers profess a kinship with all humans, and their great desire is to have Méridien join their United Earth (UE). Alex Racine journeys to Méridien to investigate and uncover the Earthers’ intentions. In the Haraken world, SADEs (self-aware digital entities) have been freed from their boxes aboard the Méridien-built starships. The mobile SADEs are powerful players in Alex’s strategies, inventing ingenious methods to investigate the Earthers and their ship. Complicating matters, the Méridien leadership is in turmoil. The Council Leader insists her people ignore the Earthers, but this path has costs. As tensions escalate, García sends a request for support to his superiors back on Earth, lest his discovery of the rich, Méridien worlds, boasting unbelievable advanced technology, slip through his grasp. A UE battleshiop heeds the call, escalating the pressure for action. Join the journey as the Harakens and Méridiens work together to protect their planets and their way of life from the newest invaders.
© 2016 by S. H. Jucha


Review:
Alex Racine is the president of Haraken, a planet of humans in a far system that includes two other planets, Méridien and the New Terrans. These peoples are distant decedents of two Earth colonies that went different ways over 700 years before. One group is much more technically advanced than the others which sets up conflicts and challenges, as well as alien attacks, which are presented in books 1 – 3.

Alex is clearly the “golden boy” to most of the population. Only the Counsel of the Méridien appears to be threatened by Alex’s control and popularity. She wants to control her government and people and keep them away from Alex and his AI friends, the SADEs, self-directed digital entities (AIs now mobile!).

An Earth explorer ship arrives in the system and is interested, then amazed by the advanced technology. The Méridien leader refuses to acknowledge or talk with the Earth ship. This puts the Earth leaders in the position of planning to overtake the planets by force is they can’t negotiate subjugation. Alex arranges to meet with the Earth leader in a social setting hiding his true authority. The Earth ship appears to have superior fighting power and Alex is aware of the threat of these forces. He must figure a way to convince them to leave his worlds alone. If not peacefully, or by trickery, then by force.

Alex’s character is a bit of a ‘super hero’ but he is likeable. I especially liked his interaction with the SADEs who are delightful characters, especially Alex’s best friend, Julien. The Earther personalities are forceful and several are unpleasant bullies with conquest mentality. I enjoyed the conflicts within the system and from the threat of the Earther ships.

The author slips in subtle (or not so subtle) portrayals of various political factors. It isn’t hard to think of our own world and leaders of differing styles, temperaments, personal goals and motives.

I was a little concerned that I had not read books 1 through 3. I think there could have been a bit more backstory as there was only a little hint of the prior stories. This adventure is fairly well self-contained with a full plot that can stand alone. I will be going back to get the prior books which have been on my Audible Wish List. I definitely want the next book, Sol when released on audio. I recommend this to sci fi fans who enjoy space opera.

Audio Notes: Grover Gardner is a well known, marvelous narrator. (I enjoy his narrations of the Andy Carpenter Series by David Rosenfelt.) Grover managers to portray the various voices and emotions so I become immersed in a story that comes alive. The narration made this an extra pleasure of reading entertainment.

I received this audio from the publisher through Audiobook Jukebox. This qualifies for Audio Challenge and H in Alphabet Soup.
Posted by Martha Eskuchen at 9:29 PM