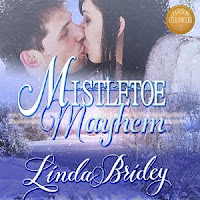 Publisher's Summary
In 1918, Sawyer Samuels is injured in The Great War and given a medical discharge. He's sent back to his hometown of Dawson, Montana, but it's a bittersweet homecoming. There is more to his discharge than he can tell most people. Shortly after coming home, Sawyer runs into Devon Dwyer, the woman who rejected his marriage proposal before he enlisted in the army. His feelings for her are as strong as ever, but after their painful parting, there's no going back.
Seeing Sawyer again drives home the point to Devon that her heart still belongs to him even though she's tried to move on. However, she knows the situation is hopeless. There's still too much anger and pain between them to reconcile - or is there?
Enter a group of their wily friends who have some tricks up their sleeves to push Sawyer and Devon to attempt to repair their broken relationship. As the Christmas season begins, chaos and mayhem ensue. Meanwhile, tensions in Dawson rise as suspicions rise and threaten the peace and wellbeing of their town. Can Sawyer and Devon recapture the love they once shared? Can the citizens of Dawson rise to the challenges and dangers that arise? Join the adventure and find out.©2015 Linda Bridey (P)2016 Linda Bridey


Review:
Sawyer Samuels felt it was his duty to go to war for his country but his girlfriend, Devon, took it as a rejection and broke up with him. Sawyer returns home on a medical discharge hoping the local doctor can reset his broken ankle. Sawyer soon sees Devon but they can barely be civil to each other. She still feels abandoned and he doesn’t trust her lack of understanding. Their friends set out to make them realize how much they still care for each other, but underhanded tricks might backfire unexpectedly.

Sawyer has other troubles as he took photographs during the battles that are not permitted to be taken or shared. Authorities show up demanding that he turn over any photos he has.

Meanwhile, there are tensions in town with some zealous patriots challenging the able bodied men, especially the Native Americans even though they sent their sons to war too. Mayor Joe is accused of speaking critically about the war and he is jailed right before Christmas. Other townsfolk want Joe to play his part in the Christmas play, A Christmas Carol. Sawyer and his friends conjure up a clever plan to break Joe out for the play and hoping to convince the accuser to drop the charges.

I enjoyed the historical aspects of the importance of the people of Montana, including the Native Americans, and their contributions to the efforts of World War I. I also found it interesting that there was such censorship and bad feelings about negative aspects of the war.

There is conflict and humor and the path to restoration of the romance between Sawyer and Devon makes a sweet story. There is a bonus with a second romance struggle between Joey (Jr) and Snow Song, a half-Indian. Plus there is a teaser courtship added after this story concludes.

Although I enjoyed the story I didn’t feel as pulled in as I had hoped. The story seemed warm enough, the characters nice enough and the historical aspects interesting enough but there was just not a strong connection for me. I think I would like to give this author another try in the future. I do recommend this to readers who enjoy sweet, historical, family-centered romance.

Audio Notes: Mary Ann Weathers did a fair job with the audio but, honestly, I wasn’t enthralled with the narration. I didn’t hear a big difference in voices, the reading seemed almost too young and, at times, it was just a “reading”, rather than a strong audio performance. This might have worked better for me as an ebook or in print.

I received this audio title from the narrator through AudioBook Boom for an honest review. This is part of my 2016 Audio Challenge.
Posted by Martha Eskuchen at 5:30 AM