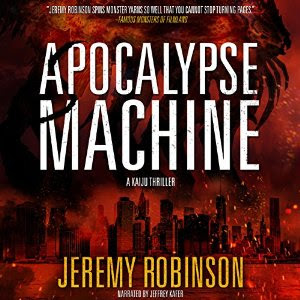 Publisher's Summary
The human race started the sixth mass extinction on Earth.
A chain of subglacial volcanoes erupt in Iceland. The melting ice floods the countryside. Poisonous gas descends on Scotland. A tsunami devastates the Norwegian coastline. An ash cloud rises into the atmosphere, blotting out the sun across Europe, ushering in a new Ice Age. Dozens of nuclear power plants, flooded by ocean water, experience meltdowns. Millions perish. Many more are displaced. All on the first day.
On the second day, a series of earthquakes moving in a straight line, reveal the presence of something massive walking across the landscape. Concealed by a thick, radioactive ash cloud, the 'aberration' heads west, toward Russia.
Abraham Wright, a science writer for Modern Scientist, who wants nothing more than to be reunited with his family, finds himself at the center of the United States' response to the crisis. Under his new title as Assistant Science Advisor to the President, Wright is sent to Europe with a team of Army Rangers, where he uncovers the truth about the ancient behemoth laying waste to the world: there have been five mass extinctions on planet Earth, and the aberration has been present at each.
On the third day, the world fights back.
And loses.
Separated from his family by continents and oceans ravaged by countless disasters and populated by strange new life, Wright struggles to survive in an evolving world. Hoping to uncover the key to mankind's redemption, he fights for answers, and to reach his loved ones - before the human race's extinction.
The Apocalypse Machine will finish it.
Jeremy Robinson returns to the Kaiju thriller genre he popularized with the largest Kaiju to ever appear in fiction: the Apocalypse Machine. Bursting with all the epic action, desperate struggle and complex characters that listeners have come to expect, Robinson takes the world to the brink.
©2016 Jeremy Robinson (P)2016 Jeremy Robinson


Review:
Abraham Wright is a science journalist. He knows ‘a lot about a lot’. He is with a team examining an Iceland volcano when they stumble (literally) across an unexpected object. One team member steps on a sharp point. Abraham gets down on the ice to inspect the out of place item. When he touches the point he is sent into a strange dream state and begins to see visions. As he is pulled out of the vision, he discovers his hand is burned and the ice around them is melting at such a speed that they may not be able to get back down the mountain safely.

Abraham has unintentionally triggered a monster machine. First it leads to volcanic eruptions which is followed by melting floods and poisonous gases. Next come the tsunamis. But that is not the worst of the destruction that has been unleashed. The Apocalypse Machine monster, which appears to be alive, strides out across Europe crushing the nuclear power plants that haven’t already suffered melt down.

Abraham and a few of the other scientists escape the machine and make it home to the United States. Abraham’s primary goal is to keep his family safe. The government has other plans. He is whisked off to a secret government facility to meet with the President and other high authorities who are trying to figure out how to survive the devastation that the human race is facing.

Although his family, consisting of his wife and son and his mistress and another son, are flown in to be with him, he is soon sent out on another dangerous mission. Abraham and a highly skilled team of military men are sent to examine the machine and learn more about it.

Abraham and the team leader barely survive the encounter with the machine. Once again Abraham is struck with visions but he doesn’t know what it means. They survive attack by parasites and face one battle after another trying to get back to the states. Early in their flight they are joined by a trained Mossad agent so at least Abraham has skilled military friends to help him survive. But they wouldn’t make it without his ability to think on his feet and improvise. The Machine is busy re-seeding (terra-forming) the world and there are many new, hostile creatures. Many years later will they be able to stop the machine before it wipes out all of humanity?

This book is packed full of action as well as intriguing near death dangers. I really liked Abraham and his companions. The author does a remarkable job creating a Biblical analogy which isn’t obvious until near the end of the book. That doesn’t make it preachy in any way, although the book does speak to mankind’s own tendencies to destroy its planet home.

Some of the events are a stretch. Still the full package is very engaging and I will want to read more by Mr. Robinson. I recommend this to sci fi fans.

Audio Notes: Jeffrey Kafer does an excellent job with the narration. He captures the character of Abraham and does a fine job with the other voices and characters also. He keeps a good pace and gives the story action depth. I do recommend this in audio format.

I received this audio title from the narrator through AudioBook Boom. It adds to my Audio Challenge.
Posted by Martha Eskuchen at 5:30 AM