#NetGalley Book Review: Someone to Trust by Mary Balogh

This is an interesting historical where the female character is older than the male.

Someone to Trust (A Westcott Novel Book 5)
by Mary Balogh 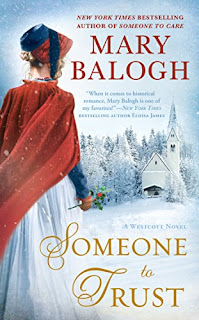 During a rare white Christmas at Brambledean Court, the widow Elizabeth, Lady Overfield, defies convention by falling in love with a younger man in the latest novel in the Westcott series.
After her husband's passing, Elizabeth Overfield decides that she must enter into another suitable marriage. That, however, is the last thing on her mind when she meets Colin Handrich, Lord Hodges, at the Westcott Christmas house party. She simply enjoys his company as they listen to carolers on Christmas Eve, walk home from church together on Christmas morning, and engage in a spirited snowball fight in the afternoon. Both are surprised when their sled topples them into a snowbank and they end up sharing an unexpected kiss. They know there is no question of any relationship between them, for she is nine years older than he.
They return to London the following Season, both committed to finding other, more suitable matches. Still they agree to share one waltz at each ball they attend. This innocuous agreement proves to be one that will topple their worlds, as each dance steadily ensnares them in a romance that forces the two to question what they are willing to sacrifice for love. . . .


Review:
Elizabeth, Lady Overfield, is an elegant widow who is surrounded by loving family for a warm, Westcott Christmas. As the family gathers to celebrate with a Christmas wedding, Elizabeth, in her mid 30s, begins to think that maybe she should remarry and have children before it is too late. Her first marriage was for love but didn’t turn out well. This time she is inclined to move forward with a suitable, reliable husband whom she can trust.

Colin Handrich, Lord Hodges, has joined the Christmas festivities to be with his recently found sister, Wren, who has married into the Westcott family. Colin and Wren were separated when young and he doesn't remember having a warm family Christmas after that. Now that he sees what loving family looks like he decides that perhaps he is ready, at age 26, to start looking for a bride to start a home and family of his own.

Colin admires Lady Overfield as a serene, confident example of womanhood. They begin to build a friendship as they discuss the potentials of the young ladies at the house party. Colin challenges Elizabeth to join in the outside activities, including snowball fights and sledding. A tumble from their sled leads to a surprise kiss. They are both embarrassed, but their thoughts wander even though they think that a relationship is not likely. After they share a magical waltz during the Christmas ball, they agree to share a waltz at the balls when they are back in London for the ton season.

Spring finds them in London keeping their promise to share a waltz. Colin has made it apparent that he is bride looking so there are plenty of matrons introducing their young debutantes. Meanwhile Elizabeth is being courted by a suitor she left waiting the previous year. Although there is no spark with the man, Elizabeth is inclined to think he is stable and suitable.

Trouble steps forward in the form of Colin’s mother who wants to perpetually be viewed as a young beauty. She will only allow other young beauties around her, so she has picked out the most beautiful of the debutantes to be Colin’s wife. Lady Hodges will do whatever it takes to squelch the rumors that Colin and Elizabeth may have a developing relationship.

I quickly was pulled in by the primary characters, Elizabeth and Colin, and their teasing friendship. Ms. Balogh does a good job developing their vulnerabilities as well as their strengths. Although Elizabeth is an older woman, she is not a cougar character. I enjoyed Balogh's usual sweet romance building, but the story seemed to be drawn out unnecessarily. I think the story could have been shortened and the tension between the couple might have been stronger. I am glad the potential scandal later in the story and the conflicts with Colin’s mother pulled the interest back. I do recommend Mary Balogh’s work as she is one of my favorite Historical Romance authors.