This is fun entertainment; I enjoyed it more than I thought I would.
Cartwright's Cavaliers
The Revelations Cycle, Book 1
By: Mark Wandrey
Narrated by: Craig Good 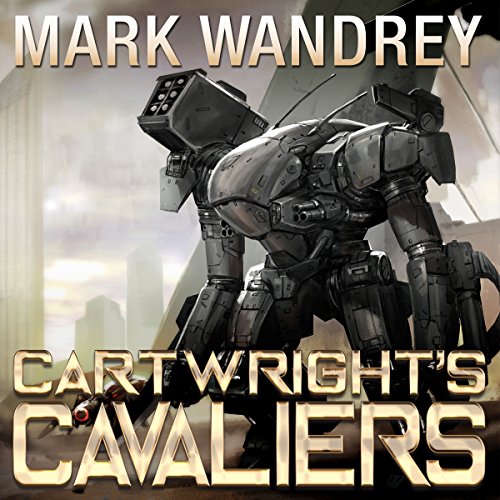 Publisher's Summary
Heir to one of the leading "Four Horsemen" mercenary companies, Jim Cartwright is having a bad year. Having failed his high school VOWS tests, he's just learned his mother bankrupted the family company before disappearing, robbing him of his Cavalier birthright.
But the Horsemen of eras past were smart - they left a legacy of equipment Jim can use to complete the next contract and resurrect the company. It's up to Jim to find the people he needs to operate the machinery of war, train them, and lead them to victory. If he's good enough, the company can still be salvaged.
But then again, he's never been good enough.
©2016 Mark Wandrey (P)2017 Mark Wandrey.


Review:
Jim Cartwright is the heir to one of the leading mercenary companies. Sadly, he isn’t athletic and failed his high school VOWS (Voluntary Off-World Assessment) test. Then he learns that his mother has bankrupted the company that he was to take over when he turns 18. Jim is downhearted until he visits home on his birthday and a caretaker explains that he does have an inheritance beyond the debts that his mother has piled up.

Jim apparently has inherited some older equipment along with his father’s keen strategy planning. His father’s old right-hand man takes Jim under his wing and they begin to rebuild the company. They gather a team of mercs willing to take a chance. No one really expects Jim to contribute much based on the mess ups in his young life. Sure enough, he soon begins to stumble through the battles but the results maybe a surprise to everyone.

I found the plot to be fun even though Jim is not your usual expert ‘hero’ character. The author makes Jeff's adventures, or should I say misadventures, to be great fun. There is plenty of action and fun contract negotiations. I hesitated getting this after reading some of the review. The story does have some juvenile, teen boy humor, especially about girls/women, but that didn’t detract from my enjoyment. I plan to continue with the series. I recommend this to readers who enjoy fun, military sci fi, alien action and adventure.

Audio Notes: Craig Good does a good job with the narration. The beginning is a little flat but soon enough he captures the frustrations and energies of the characters. The narration added to my enjoyment of the story.


Source: May 2017 Audible Credit Purchase. This qualifies for 2018TBR and Audiobook Challenge.
Posted by Martha Eskuchen at 8:58 PM