This is full of interesting history tidbits about Santa and other Christmas traditions.

The Autobiography of Santa Claus
By: Jeff Guinn
Narrated by: John H. Mayer 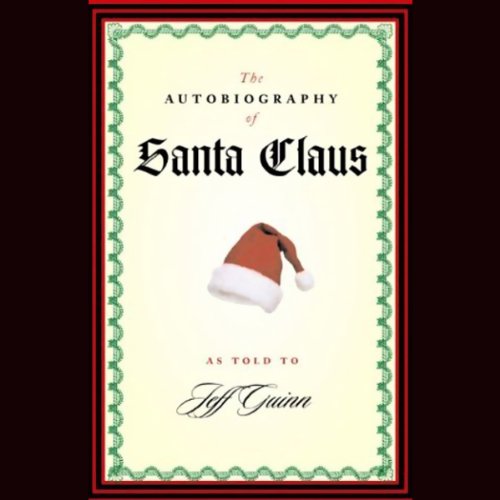 Publisher's Summary
Jump on Santa's sleigh for a journey through 17 centuries of Christmas magic!
This enchanting holiday treasure combines historical fact with glorious legend as Saint Nicholas himself reveals the definitive story of Santa Claus. From his birth in Lycia to meeting Mrs. Claus and all of his helpers, Santa relates the tale of how he spread his message of generosity and the goodness of giving across the world.
Families will delight in every entertaining chapter of this holiday classic, one for each cold December night leading up to Christmas!
©2004 Jeff Guinn (P)2004 Listen & Live Audio, Inc.


Review:
This interesting work begins with Santa choosing to share his own biography to a journalist who doesn’t quite have all the facts. He tells of his birth in Lycia in 280 A.D. and shares how his Christian faith and the baby Jesus influenced him to share his wealth with others. After years the legend of Saint Nicholas was developed around his gift giving to others in his home town.

He shares how magic became part of his story as he picked up friends along his travels and how he was given different names around the world. He also shares how many of the Christmas traditions, such as stockings, trees, yule logs and much more, began.

I was fascinated and delighted by his helpful friends who include Felix, Layla, Attila the Hun, Arthur of Britain and even Leonardo Da Vinci! I was even more interested in the history, for example, learning that Christmas celebrations were banned by American pilgrims, but fortunately celebrated in the Dutch communities.

I didn’t realize until I looked at the Table of Contents on the Kindle ‘look inside’ feature that the chapters are set out so they can be read one a night for the first 24 days of December. That is a good idea and I think would make the reading or listening more enjoyable than forging through it as I did. I recommend this to families to read and share with their children during December. The story is filled with the philosophy that "it is better to give than receive."  It would be a great way to encourage finding ways to share with others instead of focusing only on the anticipation of receiving gifts.

Audio Notes: John H. Mayer’s deep voice fits the work and Santa’s personality. He captures other voices appropriately too. The listening is engaging and fun.