This is another engaging Christmas romance with a ghostly presence.
Somewhere The Bells Ring (Somewhere in Time Book 3)
by Beth Trissel 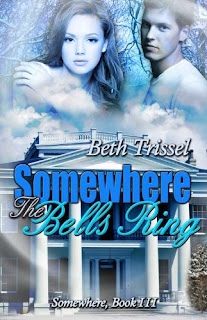 Ghosts aren't real, are they?
December 1968: Caught with pot in her dorm room, Bailey Randolph is exiled to a relative's ancestral home in Virginia to straighten herself out. Banishment to Maple Hill is dismal, until a ghost appears requesting her help. Bailey is frightened but intrigued. Then her girlhood crush, Eric Burke, arrives and suddenly Maple Hill isn't so bad.
To Eric, wounded in Vietnam, his military career shattered, this homecoming feels no less like exile. But when he finds Bailey at Maple Hill, her fairy-like beauty gives him reason to hope--until she tells him about the ghost haunting the house. Then he wonders if her one experiment with pot has made her crazy.
As Bailey and Eric draw closer, he agrees to help her find a long-forgotten Christmas gift the ghost wants. But will the magic of Christmas be enough to make Eric believe--in Bailey and the ghost--before the Christmas bells ring?


Review:
Bailey is a bit of a free spirit in a generation that tips between propriety, the traumas of the Vietnam war and ‘free love’. Bailey has been sent off to the ancestral home of her Aunt to spend Christmas and sort herself out. Things are calm, almost boring, until Bailey spots a ghost in the window and then meets the apparition in person. She creates a quick bond with the ghost and agrees to hunt for a long-lost Christmas gift.

Eric has returned home after being wounded in Vietnam, His spirits are low until he is encouraged that an old family friend, Bailey, is spending the holidays. She has grown into a little beauty who intrigues him although he is disturbed by her insistence of meeting the house ghost.
Eric is skeptical of the tales of a ghost but wants to help Bailey, even if it means humoring her quest.

I really liked Bailey’s empathy for the ghost and I enjoyed the attraction and caution between Eric and Bailey. The historical elements, the 1960s and an earlier war era, were nicely descriptive with the injuries being handled gently. There was a nice warmth to the story which I found engaging. I recommend this to romance readers who enjoy a touch of paranormal.