This is a fun listen (with warnings for language). 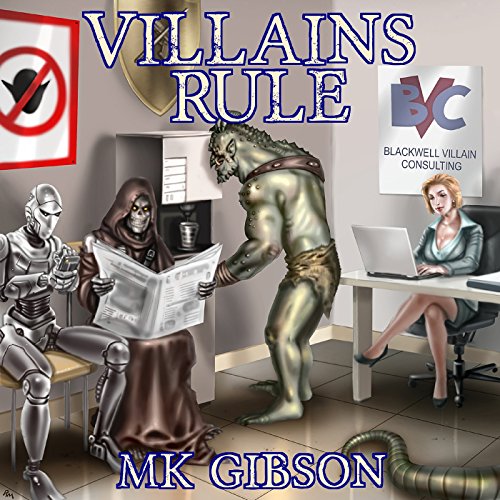 Publisher's Summary
Hi, how are you?
Yes, I am talking to you, the reader of this book's description. It's rude not to answer a person when they ask you a question. Okay, I get it, fourth-wall breaking is overdone. Get over it. This book, Villains Rule, is a fantasy action-comedy which you have to hear. Not because it redefines the genre, far from it. But rather for what it contains. A villain's tale.
How often do you get to listen to a story where the villain is the protagonist? No, not an anti-hero, or a brooding monster, nor a hero thinly disguised as a villain. And not evil. If you want evil, take that nonsense to therapy. No, I mean a villain's villain. The ones who use their power because they can, while morality is only a philosopher's complex.
This is the story of Jackson Blackwell, the Shadow Master and the top villain adviser. Sadly, even the top villain occasionally gets double-crossed. Trapped in one of the fantasy realms, Jackson has to use his skill and wits to exploit the rules, points out the genre flaws, undermine godly authority, and win the day.
Because that is what villains should do, shouldn't they? Listen to this book, have a few laughs, and find out.
©2017 Michael Gibson (P)2017 Michael Gibson


Review:
Jackson Blackwell, aka Shadow Jack, is also known as the Shadow Master. Jack used to operate as a thief and general brigand. He left field work behind and now runs a business advising villains, while claiming the top villain spot. Jack is advising one of his clients, a warlord and ruler, how to resolve a potential revolution. The man is being difficult and convinces Jack to go back to his realm to assist in a transition.

Jack takes along his trusted bodyguard, a small escort of guards, his self-absorbed nephew who needs to be trained for some type of career and his secret power source. Not too far along in the realm there is betrayal and double cross. Jack becomes a prisoner and has to figure a way out of prison and then a way back to his own realm. It helps that Jack is a God in this geek realm but he is hampered by loss of his power source. Still, Jack knows all the rules of villainy and has a trusted assistant back in his world who will help as she can.

Sometimes villains have to do whatever it takes to prevail. That might even include getting help! Jack gathers a crew of allies to help him in his dilemma. He is able to observe their uniqueness in a crowd and is able to take each unique skill, and unique story and disclose that they have a common goal.

Jack tells the story from his view, occasionally sliding into monologues to the audience. Being a top villain, he is a brilliant strategist but doesn’t always see all of the machinations of those around him; especially those he thought he could trust. Jack comments on the cliched characters and usual tropes and rules, most of which he knows how to twist. His thoughts are often sarcastic and, of course, (sadly) often vulgar. The plot and characters make for a very fun adventure -- but who do you root for when everyone is a villain?

Audio Notes: Jeffrey Kafer does a great job with the narration. He nails the irreverent tone and delivers the various characters with spot on voice and energy. The narration added life to an already strong work. This is my fourth or fifth story narrated by Mr. Kafer and I am impressed by his skill and versatility in capturing the characters. I am glad I listened to this on audio.

My hesitation on getting more in the series is due to not wanting to listen to more foul language. That’s just my choice.