#NetGalley and Audible Book Review: The Trouble with Twelfth Grave by Darynda Jones

This was a good entry in the series.
The Trouble with Twelfth Grave
A Novel
By: Darynda Jones
Narrated by: Lorelei King 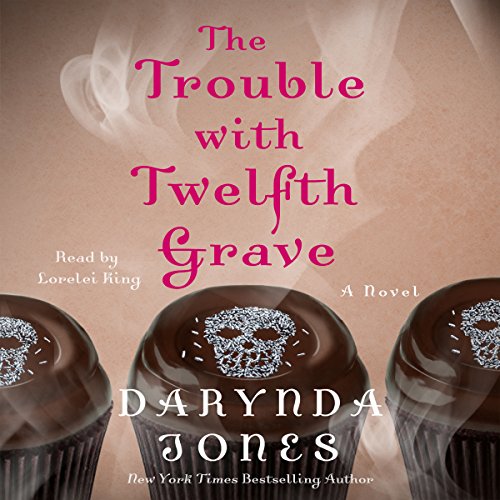 Publisher's Summary
Grim Reaper Charley Davidson is back in the 12th installment of Darynda Jones' New York Times best-selling paranormal series, The Trouble with Twelfth Grave.
Ever since Reyes Farrow escaped from a hell dimension in which Charley Davidson accidentally trapped him, the son of Satan has been brimstone-bent on destroying the world his heavenly Brother created. His volatile tendencies have put Charley in a bit of a pickle. But that's not the only briny vegetable on her plate. While trying to domesticate the feral being that used to be her husband, she also has to deal with her everyday life of annoying all manner of beings - some corporeal, some not so much - as she struggles to right the wrongs of society. Only this time she's not uncovering a murder. This time she's covering one up.
Add to that her new occupation of keeping a start-up PI venture - the indomitable mystery-solving team of Amber Kowalski and Quentin Rutherford - out of trouble and dealing with the Vatican's inquiries into her beloved daughter, and Charley is on the brink of throwing in the towel and becoming a professional shopper. Or possibly a live mannequin. But when someone starts attacking humans who are sensitive to the supernatural world, Charley knows it's time to let loose her razor-sharp claws. Then again, her number one suspect is the dark entity she's loved for centuries. So the question becomes: Can she tame the unruly beast before it destroys everything she's worked so hard to protect?
©2017 Darynda Jones (P)2017 Macmillan Audio


Review:
Charley’s husband, Reyes, has returned from the hell dimension as a wrathful, brimstone satanic god set on destroying Charley’s world. Charley is convinced that the better side of Reyes is still within the evil Rey’aziel but God’s archangel, Michael, has given her a time limit to control Reyes or he must be eliminated. Charley and her friends, Cookie, Osh, Garrett and ghost Angel, plot out how to capture Reyes.

Charley is also trying to help her Uncle Bob investigate bizarre deaths where the victims are strangely burned. Charley is desperately hoping that the killer isn’t her fiery husband.

Meanwhile Charley is dealing with the mundane mysteries of her private investigation business, including trying to help clients sort out the ghostly beings in their homes. Additionally, she has to protect a friend who had an unfortunate connection with an overbearing, possessive and abusive man who has ended up dead. On top of all of that, her best friend’s daughter, Amber, is starting her own investigation agency to pursue troubles at school.

There is plenty to keep the reader interested in this volume. I enjoyed seeing so many of Charley’s friends, including her supernatural rottweiler, Artemis, and her asylum friends, Rocket and Blue. Even Beep is threatened and makes a brief appearance. There is good tension and a few surprises. All of the action made it worthwhile getting past the one fairly steamy scene. The book ends with a customary zinger so I am certainly anxious to see how the author wraps up this series in the final book.

Audio Notes: Lorelei King is the voice of Charley and her cohorts. Her narration is spot on as usual and adds to the emotion of the story.


Source(s) NetGalley 2018 and Audible Sale Purchase November 2018. I am counting this towards NetGalley and Audio Challenges.

My reviews for books one through eleven can be read under this link.
Posted by Martha Eskuchen at 10:44 PM