This was a quick, fun listen.

Escape from the Overworld: A Minecraft Gamer's Quest:
An Unofficial Minecrafter's Adventure
by Danica Davidson
Narrated by: Dan Woren 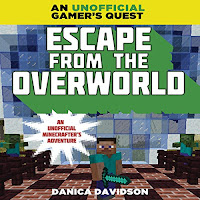 From the publisher of The Quest of the Diamond Sword and Battle of the Nether comes a new novel for Minecrafters which takes on a spellbinding battle that brings Stevie and zombie mobs into the real world!

Stevie is in for a big surprise while building his treehouse: he’s first attacked by a creeper, and then must take on a group of zombies! The near miss has him feeling like the worst mob fighter in Minecraft, so when he finds a portal into a brand-new world, he’s willing to take his chances.

He steps out of a computer screen and into the room of a sixth-grade girl Maison, who’s a talented builder. Stevie is shocked by how different this world is, and Maison takes him under her wing. But soon the two friends learn zombies have also made their way out of the portal!

More and more creatures are slipping out by the second, wreaking havoc on a world that has no idea how to handle zombies, creepers, giant spiders, and the like. Stevie and Maison must put their heads together and use their combined talents in order to push the zombies back into Minecraft, where they belong. As Stevie and Maison’s worlds become more combined, their adventure becomes intense and even more frightening than they could have ever imagined.


Review:
Stevie is a clumsy 11-year-old Minecrafter child who struggles to impress his successful, warrior father. Stevie hoped to make his father proud with his efforts to build a tree house but he forgets the time and is attacked. His father has to come to his rescue… again.

The next day Stevie gets frightened by a spider and falls into a brand new portal into another world. He finds himself in the room of a sixth-grade human girl, Maison. They are both startled by the overlap of their worlds but they discover they have much in common.

Maison takes Stevie to school with her and he learns that there are bullies in the human world too. He feels helpless to help his new friend. Then the Minecraft monsters start to enter the human world through the open portal. Stevie and Maison work together to fight the monsters and to protect their classmates.

As much as Stevie is thrilled with his new friend, Stevie knows he must return to his world and close the portal. Will he be able to return home and keep his friend safe?

I saw this on sale for a small amount and figured it was worth a try for a few hours’ of entertainment. It is light entertainment that touches on the issue of bullies, self-confidence and overcoming fear. I recommend it for young readers (ages 7-12+/-) and also to those who enjoy battle adventures.

Audio Notes: Dan Woren does a good job narrating this. He captures the youth and frustrations of the children. I enjoyed the audio entertainment.