#NetGalley Book Review: Let There Be Light by Dan Gordon and Sam Sorbo

I liked this Christian novel and hope to see the movie.

Let There Be Light
by Dan Gordon and Sam Sorbo 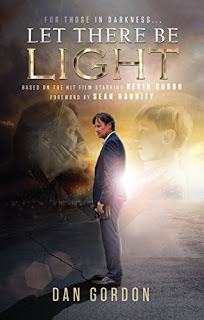 Sol Harkens has it all. A new best seller, a gorgeous model girlfriend, immense success. He’s the Mohammad Ali of outspoken atheist celebrities. But not everything is perfect in Sol Harkens’ life. After losing his son to cancer he dedicated himself to denying God and parlayed his attacks on Christianity into a lucrative business. But Sol is empty inside. His party lifestyle has isolated him from his ex-wife, Katy, and their two sons. He resents their unrelenting faith and Katy’s prayers for his soul.

When Sol’s self-destructive habits end in a serious car crash, he wakes up to learn he was clinically dead for four minutes. Being dead isn’t what bothers him. It’s the voice. Five simple words that refuse to let him go: “Daddy, let there be light.”


Review:
Sol Harkens makes a living as a bold, brash Athiest. He not only enjoys his debates he enjoys annihilating and humiliating his Christian opponents with mocking and derision. He struts for the TV to promote his anti-God books. He lives large partying with the publicists and escorting model girlfriends. And when he’s not partying in public, he’s drowning his grief at home with alcohol and opioids.

Sol lost his first born son to a rare illness and has resented God ever since. He is estranged from his ex-wife who is a believer and his two younger sons who are being raised with her faith. They can rarely find common ground.

Driving drunk after a party, Sol is in a near death car crash. While clinically dead, Sol encounters his dead son who entreats him; “Daddy, let there be light.” Now Sol must face the biggest conflict and decision of his life. If he admits he had a vision in death, he could lose his entire career and reputation. But what could happen if he doesn’t admit it? And what did his beloved son mean by the cryptic message?

As I started reading this I felt there were similarities with God’s Not Dead, which my husband and I had just watched the week before. (Not a coincidence for me but rather a God incidence.) When I picked this book in my December NetGalley selections I didn’t realize it was a movie. Kevin Sorbo is the star of both movies and the director of Let There be Light. The storyline was the dream child of his wife, Sam Sorbo.

There is an interesting forward telling how the story and movie came about. The story is written for an “everyman” audience and not as a literary classic. There were scenes that made me cringe at the crude, self-destructive life style of the main character. But this set the scene for the faith revelations and the contrastingly strong faith foundation of his ex-wife and sons. I liked Pastor Vinny’s character and the hope message that is shared. I found this entertaining and recommend it to readers who enjoy faith based fiction…and especially those who support the message: Let there be light!


Source: NetGalley 2017. This qualifies for 2018TBR, NetGalley and Alphabet Challenges.
Posted by Martha Eskuchen at 10:15 PM