#NetGalley Book Review: Nick Newton is Not a Genius by S.E.M Ishida

I enjoyed this Middle Grade story and its charming illustrations.
Nick Newton is Not a Genius
by S.E.M Ishida 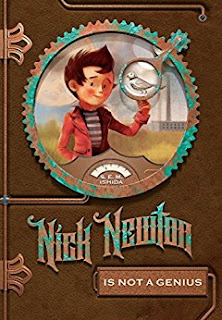 Nick Newton is not a Genius. He’s just a merely average boy from the country of Thauma. He may not be brilliant like his mom and dad or a child prodigy like his sister, but he won’t let that stop him from uncovering the mysteries of a clockwork factory or revealing a war hero’s greatest secret. With help from two new friends and his butler named Jude, Nick embarks on an adventure that will change his life forever.


Review:
Nick Newton is a fourth grader who is not a genius like his parents and his older sister. His mother is a genius scientist and his father is a genius artist. His annoying sister, Erma, is a child prodigy with several talents. Nick’s testing reveals he is a normal kid and won’t be able to attend the school for the genius children. This sets his parents on a search for an appropriate alternative school.

Meanwhile, Nick is happy to be working on a project he found in the attic, among his grandfather’s things. His grandfather, for whom Nick is named, was a war hero and famous inventor of weapons. Nick is sure that greandfather developed other things besides war weapons. Nick has found the parts of a clockwork bird and instructions and he is intent on piecing the bird together.

When Nick begins his new school the founder of the school, Mr. Volk, wants Nick’s mechanical bird as a collector’s piece. Nick is cautious of the man especially in light of negative rumors regarding him and his robotic inclinations. Will Nick be safe in the school and can he protect his treasured clockwork bird? Can they unlock the secrets hiding in grandfather’s locked trunk?

This is a fun story with engaging, uncomplicated illustrations. The secondary characters, including his family, the butler and Mr. Volk, have their individual charming, quirks which add interest. The story reads easily and I think middle school students would certainly enjoy this as I did. Nick learns from mistakes and adventures as all normal children should/can. I enjoyed Nick’s discoveries and realizations at the end of the story even though the ending seemed a bit abrupt.

The tag words at Amazon include "Christian" however I did not see any overt religious message. I think perhaps the implications of a mechanical heart may be involved in that tag. I do recommend this especially for students (and adults) who enjoy clockwork or model elements and a little mystery too. I am encouraging my eight-year-old granddaughter to try the story.


Source: NetGalley Selection 2018. The qualifies for my NetGalley Challenge and as a 2018 title for Alphabet Challenge.
Posted by Martha Eskuchen at 9:36 PM