This mystery and romance had some good twists.
Hearts Under Fire
by Antonio Scotto di Carlo 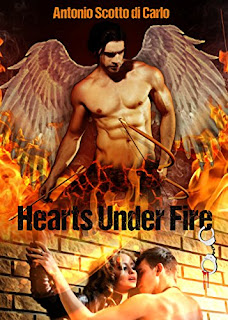 Jenny is a beautiful young businesswoman. She lives in an Italian tourist town where she owns a shop. Her need for independence is her strength, but her innate distrust sometimes creates problems with others.
One day she encounters love. More than an encounter, it’s a collision, a head-on collision. Her heart isn’t Eros’s only target, and everything changes …
Police begin investigating suspicious events around her, slowing down the construction of a new great hotel in town and rocking her life even more.


Review:
Jenny is a young woman making a success of her sales shop in an Italian tourist town. She has been betrayed in the past, so she guards her independence fiercely to the point of spoiling her personal relationships. She is trying to find a way to rent the space above her shop so she can store her inventory on site. She meets with her landlord who flirts with her but she thinks she can convince him to give her a discounted rental rate with the goal of buying it.

Her normally proper boyfriend, a successful architect, unexpectedly invites her to go out of town for a resort weekend. He is a good man but is pressuring her a bit to get married. At the end of the weekend he convinces her to accept her proposal. Shortly after they have returned home the police show up at her door to announce that he has been murdered. Because a similar murder occurred a few months before the police are not sure whether this is a random murder or something related to his work.

The strange coincidence is that one of the detectives, Chris, is a man who Jenny recently exchanged heated glances with in the market. Chris is enchanted with Jenny even though he should have nothing to do with her because of the investigation.

Chris and Jenny soon fall in love with intense chemistry but intense conflict too. Chris has his own past demons that create warnings and obstacles which run up against Jenny’s obsession with independence. His reactions begin to create a growing negative suspicion in Jenny that causes a traumatic twist in their relationship.

I enjoyed the warm, descriptive writing style very much. I was surprised that this was written in Italian and translated into English as it flowed quite well. The sexual encounters were a bit cliched but not grossly graphic. I really liked the twists and turns which culminate in a final twist in the last chapter. There is a fun (and strange) rap song included. It was an engaging romance/mystery mix that I recommend to readers who enjoy those genres.


Source: 2017 Author through Goodreads. This qualifies for 2018TBR and Alphabet Challenges.
Posted by Martha Eskuchen at 5:30 AM