I enjoyed this romantic suspense but there is too much cursing for my tastes.
Lock 'N' Load (Federal K-9)
by Tee O'Fallon 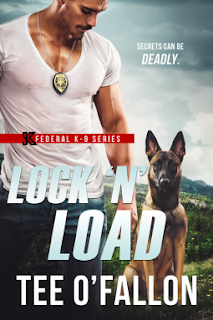 Crack CIA analyst Trista Gold is a whiz with the computer, but not so much with people. She hides behind her job, analyzing Top Secret code and making recommendations on national security. She doesn’t need a man in her life. But she will, very soon...
CIA K-9 officer Sgt. Matt Connors suspects that beneath Trista’s uptight appearance, there’s a sexy woman itching to cut loose. But he doesn’t dare act on his attraction. He’s a loner and always will be. Keeping away from Trista is a must-do directive. Until he doesn’t have a choice...
During a routine assignment, Trista stumbles across a cryptic exchange. She doesn’t think much of it...until someone tries to murder her—twice. Both times, Matt had been there to save her. But now she has to hide. And her new bodyguard, Matt, and his K-9 are the only hope she has against the powerful forces that want her dead.


Review:
Trista is a crack CIA analyst who is sorely lacking in self-confidence and social skills. Presumably she was a computer nerd through her growing years and never met a boy or man to show her the world beyond computer code. Then she meets CIA K-9 officer Matt Connors. He is a hunk, of course, and Trista is flabbergasted to be saved by him --- twice in one day! He is so kind to her, but she knows a man like him couldn’t be interested in a geek like her. And it doesn’t help that she has been frightened of dogs since a bad encounter as a child.

Matt has always been able to get any woman he wants but he makes it clear there will be nothing beyond a good time. He has a guilt-ridden soul that tells him he doesn’t deserve love or happiness. He sees beyond the geeky Trista to the beautiful woman behind the mousy clothes. He is glad to help her and hopes to show her she is more than a computer nerd, but he can’t allow himself to respond to the pull of attraction and longing for something more that he feels when he looks at or thinks of her.

Trista has uncovered a suspicious, mysterious and threatening chat but her identity was exposed by a few minutes of computer breakdown. She doesn’t want to think the night time attack on her has anything to do with what she saw but a second attack on her life convinces everyone else around her that her life is in danger. Security assigns Matt to be her body guard so the pair are reluctantly thrown together.

Matt takes her to the safest place he knows – his own home where a handful of his old training buddies are visiting. Each one is a man-worthy canine officer within different branches of enforcement. Their attentions help Trista to come out of her shell while raising the jealous nerves for Matt. But he has to concentrate on keeping her safe before he can face his own demons to try to be the man she challenges him to be.

I did like the chemistry between Trista and Matt even though I couldn't relate too well to Trista's rather wimpy character. Fortunately she grows through the danger. And of course, I love the canine element although it is secondary to the romantic suspense. I also enjoyed the banter of the hunky friends. I imagine there could be great romantic suspense stories for each friend. The suspense, danger and action are all laid out well to keep the book moving along at a good pace. The sexual encounters are an addition, not the focus, and they are sizzling without being crass. The romance has conflicts that provide for realistic growth for both characters.

My only objection with the book is the free and liberal use of foul words. Sadly, that distracts and detracts from my enjoyment of the story. I acknowledge I am sensitive to foul language – I don’t use it and don’t like it. I’ll accept a little but not continuous through the book. If the series came with an edited version I would read every one. Otherwise I will most likely pass for other less vulgar works. I recommend this to readers who enjoy strong romantic suspense with all the good elements: romance, suspense and action. Just be cautioned about the language.