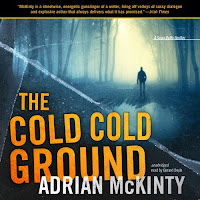 Publisher's Summary
Adrian McKinty was born in Carrickfergus, Northern Ireland. He studied politics and philosophy at Oxford before moving to America in the early 1990s. Living first in Harlem, he found employment as a construction worker, barman, and bookstore clerk. In 2000 he moved to Denver to become a high school English teacher and it was there that he began writing fiction.
In 2009 he moved to Melbourne, Australia, with his wife and two children. His first full-length novel, Dead I Well May Be, was short-listed for the 2004 Ian Fleming Steel Dagger Award and its sequel, The Dead Yard, was selected as one of the twelve best novels of the year by Publishers Weekly.
In 2008 his debut young adult novel, The Lighthouse Land, was short-listed for the 2008 Young Hoosier Award and the 2008 Beehive Award. The final novel in the Dead trilogy, The Bloomsday Dead, was long-listed for the 2009 World Book Day Award.
In 2011 Falling Glass was an Audible.com Best Thriller.
©2012 Adrian McKinty (P)2012 Blackstone Audio, Inc.


Review:
This story is set in an era of political violence in 1980s Northern Ireland. Detective Sean Duffy, a Catholic, is a new detective working for the Royal Ulster Constabulary. He checks for bombs under his car before driving as he doesn’t really know if he is safe in his Protestant neighborhood. Nor does he feel safe near the police station or out and about as he goes about his job.

A man is found dead in his car with his hand cut off and lying on the floor. Duffy feels as though he missed something at the scene. He doesn’t realize what it was until the coroner calls to tell him the hand belongs to someone else. Hours later they find the other man. The sawed-off hands would indicate they may have been informers but both men are gay and the murderer leaves messages noting that as his motive. Duffy’s superiors don’t want to admit there may be a serial killer of gay men on the loose and they are pressuring him to wrap this up quickly.

While hunting clues, Duffy finds an Irish girl hanging in the woods. The young woman turns out to have disappeared months earlier and she was the ex-wife of one of the current prisoners who are part of a hunger strike. Authorities are ready to declare the hanging as a suicide, but Duffy doesn’t think so. His gut tells him there is a connection somewhere.

Duffy is not making friends as he stalks a local henchman to unsavory places. Then he discovers one of the victims was the head of a secret IRA division. Things are getting more complicated and soon he is a target even as his boss pulls him off the case.

I really liked Duffy from the beginning although I didn’t like all his behaviors. I appreciated his determination and willingness to listen to his gut instinct. He puts himself at risk, ignoring orders to stay away from the case. Violence is prevalent among the characters and it is hard to determine which is the ‘right’ side of the Irish conflicts. The history elements were really fascinating. I liked the detailed police procedure and tension. The gritty style clearly fit the time and characters. I recommend this to readers who like gritty, police procedural detective mystery and those who may be interested in Irish conflict.

Audio Notes: Gerard Doyle’s narration enhances the story as the accents make the setting come alive. The narration made this a better ‘read’ for me.


Source: 2015 Audible Credit Purchase. This qualifies for my 2018TBR, Audiobook and Alphabet Challenges.
Posted by Martha Eskuchen at 11:00 PM