This is good adventure with interesting futuristic weapon detail. 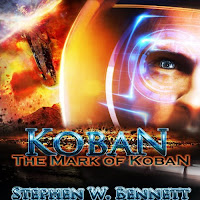 Publisher's Summary
Book 2 of the Koban Series
Already faster and more powerful than the last 17 species that they have destroyed or subjugated, the Krall have set their sights on humankind. After testing humans on their future home world of Koban and finding them worthy opponents, the Krall start a war of slow extermination with the rest of humanity. The war is intended to last generations as they apply their own version of "natural selection" to cull their weaker warriors in combat, purifying the Krall gene pool with their finest warriors for breeding. Why? The Krall desire to rule the galaxy someday, from their future home world of Koban, where the impossibly fast and powerful animals have proven to be too fast and strong for them to match. Only through the attrition of war will the Krall perfect their bloodline to become the masters of Koban. When the Krall departed Koban to start their war with humanity, they destroyed the protections that kept their prisoners safe. They left the human test subjects to fall victim to high gravity, and the deadly predators. Big mistake. The bio scientist left behind enhanced the human genome with Koban genes, forming the next generations of humans. They are becoming what the Krall sought to be. The fastest, most powerful species in the galaxy. The men and women trapped on Koban, locked in a struggle for their own survival for twenty years, return to the stars to help defend Human Space. The Krall have had their way with human worlds, killing when and where they wish. Outnumbered, the new Kobani will now take the war to the Krall.
©2013 Stephen W Bennett (P)2014 Stephen W Bennett


Review:
This picks up from Book One when the Krall, a vicious killing species, abandon captured humans on Koban expecting that the hostile environment to kill the humans. Instead the humans have learned to survive. A progressive group has thrived by accepting gene therapy to improve their abilities. Several married couples have produced the first generation with enhanced genes. This group plan to be ready for battle if the Krall ever return. And if they can find a way off planet they will face the Krall where they threaten other humans.

I was pulled in following the characters from book one as they developed friendships with other native species. In addition to becoming allies, they are adding more special skills to the human gene pool. Meanwhile the Krall begin a slow war and eradication of the human colonies.

I like the multiple perspectives, from the Kobani humans, the humans being attached on colonies and the enemy Krall. There are a few slow areas with detail of weapons and technology, but even that was fascinating due to the author's imaginative creation. I recommend this to readers who enjoy space sci fi, alien battles. I enjoyed the audio experience and will be getting the next in the series.

Audio Notes: Eric Michael Summerer does an excellent job of narration. He provides distinct voices, emotions and energy. The audio enhanced my enjoyment of the excellent, engaging story.