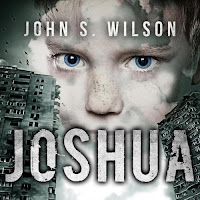 Publisher's Summary
He had to keep moving, that the man instinctively knew. He had to get away, from the rioting, the lawlessness, the killing. Away from the brutal gangs that ruled the highways. Then there was the boy that he found along the way, an orphan with no place to go. He couldn't leave the child behind; that would be murder. Together they had to make their way across the razed landscape of post-collapse America, west to where there was safety, a chance to begin again. If only they survived the journey.
©2012 John S. Wilson (P)2013 Podium Publishing


Review:
The man and boy, Joshua, have traveled a long way. Now the man is sick and they have been captured by an unknown group. They are treating him pretty roughly as they suspect him of mistreating the boy. After a few days the man tells his full story.

The man had a mixed work background, including EMT experience. He was living in Tennessee, but when the economy collapsed he chose to travel home to Lexington, Kentucky in hopes of finding his parents. The man had a good heart and sought to help those in need along the way. That didn’t work out so well. He had a vehicle when he started but it didn’t take long before looters attacked.

The man had hoped the cities would be in better shape than the highways. Instead he found fires, devastating destruction and death. He finds a twisted surprise at his parent’s neighborhood. As he continues along the edges of the roads, the man has to avoid evil gangs, militia groups and even worse, all while foraging for food and water.

At one point the man finds a dying woman with a toddler. He can’t leave the child alone so he becomes his protector and provider. They see horrors and little kindness along the way. Can the man keep Joshua safe to get across country to Wyoming where he hopes to find his brother? Can the man stay true to his Christian background in a world where he faces kill or be killed?

This story reminded me of The Road which also dealt with an unnamed man and his son. I did not find this as eloquent as The Road but I did find it engaging. I like the man and the boy, Joshua, whose growth comes with the influence of the man’s ideals and background. I thought the story was building to a different ending, but we don’t always get what we want. There is grittiness and bleakness consistent with post-apocalyptic society. If you don’t like bleak post-apocalyptic then this might not be for you. I recommend it to readers who like character studies in post-apocalyptic stories.

Audio Notes: Jonathan Yen does a very nice job with the narration. His rendition fits the contemplative bleakness of the difficult journey of The Man. He provides different voices for characters when applicable. The narration added to my enjoyment of the story.