This pulled me in as soon as I started listening!
The Never Hero
The Chronicles of Jonathan Tibbs, Book 1
By: T. Ellery Hodges
Narrated by: Steven Barnett 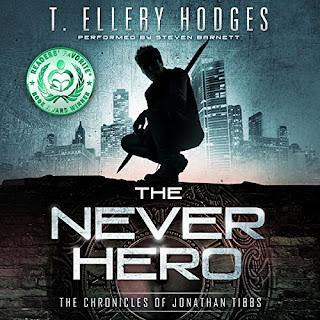 Publisher's Summary
At the gates between worlds...
In a war outside of time...
He fights for us.
Reclusive college student Jonathan Tibbs wakes in a pool of blood, not a scratch on him. His life is about to undergo a massive shift. A violent and merciless otherworldly enemy unleashes slaughter in the streets, calling out in a language only he understands.
And it is seeking its challenger.
In order to defeat the threat, Jonathan must become a temporal weapon...while remaining completely anonymous. Unfortunately, harnessing off-world powers has its own special challenges...
The Never Hero is the first installment in The Chronicles of Jonathan Tibbs - a mind-bending, genre-crossing action-adventure trilogy.
©2014 T. Ellery Hodges (P)2015 Foggy Night Publishing


Review:
Jonathan Tibbs isn’t anyone’s idea of a hero. He’s not athletic but just a quiet, reclusive college student. When he wakes up in a pool of his own blood and his life turns upside down. While Jonathan tries to find his place and purpose, his roommates keep an eye on him. One night the news shows a monster attacking in the city. Jonathan erupts in anger and heads out to battle the alien enemy.

Jonathan doesn’t understand what is going on, but he’s been pulled into an alien battle where monsters enter through a portal and seek the right challenger. There is a strange man who has chosen Jonathan, placing a device within him that triggers a warrior instinct that connects him to the alien monsters. Each battle occurs in a temporal distortion which means only Jonathan remembers. Jonathan has been assigned the task to fight for the survival of humanity – whether he wants the task or not. He realizes he will have to prepare his body and skills for the next encounter.

Meanwhile government operatives are watching, trying to figure out what is going on and hoping to capture the stranger who meets with Jonathan in secret. They are willing to manipulate others to pursue their own goals.

This pulled me in with an opening battle and kept my attention with the mystery of Jonathan’s situation. The beginning does have some college, coming of age issues but later it is interesting to follow Jonathan’s reluctant acceptance of his duty and to learn of the twisted rules of the alien race. Even more disturbing is how they got to the stage of their challenges. The complexity of Jonathan’s struggles with becoming a reluctant hero are an interesting element of the story. There is plenty of alien, one on one battle action and remaining mystery to wonder where the story will go. There are hints of another character which adds tension for the next book. I recommend this to readers who like alien battles and mystery.

Audio Notes: Steven Barnett does a great job with the narration. He portrays the voices and adds the emotional confusion and intensity of the situations. I kept picking this up when I had the chance and lost an hour or two of sleep listening. The narration added to my enjoyment of the entertainment.