This is engaging sci fi rebellion.

The Hills of Mare Imbrium
by Carleton Chinner 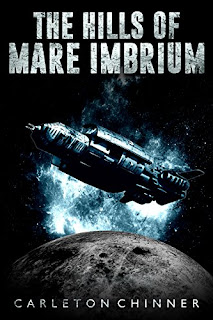 When Jonah arrives on the Moon, he isn't expecting much. All he wants is to stay out of trouble and start a new life working on the Helium mine at Chang’e Base. He doesn’t expect to be swept into the raging undercurrent of the Moon's racial tensions and politics.
Yesha is desperate to escape her domineering uncle. In a moment of rebellion, she agrees to have dinner with Jonah and his friend. A simple decision that will change her entire life and set her on a collision course with her uncle.
Unknown to either of them, the head of security, Wang Mei, has plans to enslave the people of the Moon and seize control of the incredible wealth that comes from supplying the world with energy.
Their lives collide in a perfect storm where no one is safe and freedom is the ultimate prize.


Review:
Jonah lost his favored brother to the wrong crowd in a mess that left Jonah tainted and a liability to the family. Now Jonah has been exiled to the Moon where he has no real prospects. He makes a new friend, Lucien, not realizing that he will soon be caught up in rebellion.

Yesha is the niece of the Moon’s governing authority. She doesn’t agree with his oppressive style that shows no rights or respect of the Moon folk. Yesha was born of earthers but was modified by her mother to become a child of the Moon. The head of security, Wang Mei is more than happy to brutally abuse the Moon workers. He has his own plans to enslave them even if he has to destroy their cities to beat them into submission. Wang Mei has abusive plans for Yesha too.
Yesha agrees to have dinner with Lucien and Jonah. But that night events spiral out of control putting her on the run from Wang Mei and destined for an unexpected future leading the rebellion.

There are secondary characters who are fun. The characters are nicely developed and the story is told from alternating perspectives which helped to keep it engaging. The pacing was good after a little slow start. The lunar rebellion and production line reminded me of The Moon is a Harsh Mistress. I enjoyed the human implants and the manipulation of the droids. I recommend this to those who enjoy sci fi colonization stories.


Source: NetGalley 2017. This qualifies for 2018TBR, NetGalley and Alphabet Challenges.
Posted by Martha Eskuchen at 9:32 PM