This is a fun listen – a nice mix of fairy tale and YA. 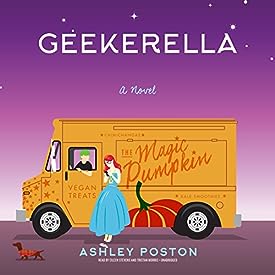 Publisher's Summary
Geek girl Elle Wittimer lives and breathes Starfield, the classic science-fiction series she grew up watching with her late father. So when she sees a cosplay contest for a new Starfield movie, she has to enter. The prize? An invitation to the ExcelsiCon Cosplay Ball and a meet-and-greet with the actor slated to play Federation Prince Carmindor in the reboot. With savings from her gig at the Magic Pumpkin food truck and her dad's old costume, Elle's determined to win - unless her stepsisters get there first.
Teen actor Darien Freeman used to live for cons - before he was famous. Now they're nothing but autographs and awkward meet-and-greets. Playing Carmindor is all he has ever wanted, but Starfield fandom has written him off as just another dumb heartthrob. As ExcelsiCon draws near, Darien feels more and more like a fake - until he meets a girl who shows him otherwise. But when she disappears at midnight, will he ever be able to find her again?
Part-romance, part-love letter to nerd culture, and all totally adorbs, Geekerella is a fairy tale for anyone who believes in the magic of fandom.
©2017 Ashley Poston (P)2017 Blackstone Audio, Inc.


Review:
Elle’s father was a founder of ExcelsiCon when Cons were fairly new. Elle shared her father’s love of the sci fi program Starfield and enjoyed the excitement of the sci fi conference until her father’s death. Now Elle lives with her stepmother and two step-sisters, one of whom is particularly mean. Her stepmother hasn’t lost her resentment for Elle’s close relationship with her father and she doesn’t give Ellie any slack at home.

Across the states, teen actor, Darien Freeman, has just been announced as the new face of Starfield’s main character, Carmindor. Coming in from a beach show, many Starfield fans, with Ellie at the lead, consider him a weak player who won’t be able to live up to the job. Darien is scheduled to attend the Sci Fi Con for pormotion. He used to love the Con until he was betrayed and exposed by his best friend. As Darien tries to manage a way out of attending the Con he accidentally connects with Ellie. They begin a texting exchange not knowing the true identity of each other.

I really enjoyed this modern-day Cinderella story. I like the primary characters and some of the secondary characters play good supporting roles. As in most Cinderella stories, I was rooting for the geek and the star to find a way to meet and develop a true relationship. I was also hoping for the downfall of the unloving stepmother and bratty, bullying step-sister.

The story is told from alternating first person views by Ellie and Darian. The romance is appropriately sweet for a younger audience. The fandom is a great element to draw cosplayers and sci fi fans. The story is fun and I recommend it to readers who enjoy cosplayers, Cons and fairytale romance.

Audio Notes: Eileen Stevens and Tristan Morris do a great job on the shared narration. The capture the youth and self-deprecating attitude of the primary characters. They also do a fine job with the other characters. The full package is very entertaining.