I enjoyed the characters and stories in this mystery pair.
Welcome to Outcast Station
by Jeanne Adams,‎ Nancy Northcott 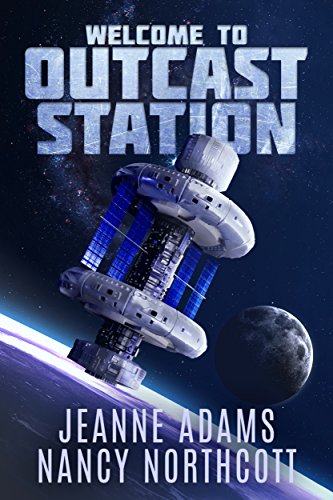 Welcome to Outcast Station
Even outcasts deserve a shot at redemption.
~
The Accidental Plague by Jeanne Adams
Outcast Station is a backwater, but for BVax Scientist Ravinisha Trentham, any posting is better than washing dishes. Ravi is top in her graduation class, but only Outcast would hire a McKeonite. Someone on the station wants her dead, but when a plague breaks out, Ravi may be their only hope. If the murderer gets to her first, everyone will die.
The New Badge by Nancy Northcott
Deputy Marshal Hank Tremaine crosses the wrong person and lands at Outcast Station, the armpit of Terran space. His hostile boss promptly assigns him to a backcountry murder. Solving it will help redeem his reputation and get him posted somewhere more civilized. But failing to find the killer will bury his career once and for all.


Review:
These are two distinct stories set in a edge of space station that is looked upon as an outpost for the castoffs of employees. If you aren’t considered good enough, come from the wrong class or wrong people, or maybe have messed up on a prior assignment then this is the place you are likely to be sent.

In The Accidental Plague, the protagonist, Ravinisha, is a top of her class scientist who can’t get hired due to prejudice against her planet race. Fortunately, there are several officers at Outcast Station who look beyond the past and see her strong potential. The scientist whom she will follow gives Ravinisha the first warm welcome she has had in her young life. He shows her the ropes and even takes her sightseeing a bit. Ravinisha is also welcomed and accepted by the Station enforcement officers and several others.

But there are those who want her gone enough to vandalize her room and threaten her. There is also a sly offer made to cut her in on a smuggling ring. Ravinisha is coping with these issues when a feverish and deadly epidemic strikes across the station. Can Ravinisha find a cure before the station becomes a floating tomb?

I really enjoyed these characters and became invested in their well-being. There are small clues to pick up on the mystery which was nicely plotted and presented. I would love to read more about Ravinisha and her friends on Outpost Station.

The New Badge brings a new enforcement officer into town as a punishment from a boss with whom he conflicted. Deputy Marshal Hank Tremaine is actually a properly detailed investigator, but his forthright approach isn’t appreciated by everyone. He is assigned to a murder case in an outlaying area and it seems clear his new boss is going to make Hank’s redemption difficult.

Hank is determined to perform his job with precision, but he encounters obstacles in the form of sloppy work from his co-workers with discrepancies and deficiencies in the evidence. Next thing Hank knows his shuttle vehicle is sabotaged and he and a local officer are lucky to survive the crash. When Hank recovers from his injuries the chief hands him a wrapped-up case with an arrest based on witness testimony.

Hank and the locals are sure that the arrested suspect is innocent, and it sure looks like someone wants to close the case before Hank can uncover anything more. He is caught in a hard place because he will have to disobey his chief (and risk getting a better job posting) if he continues to pursue the investigation. Too bad it just isn’t his nature to walk away when the facts don’t add up.

I liked Hank’s character and enjoyed this mystery investigation. He really had to work around ineffective staff and corruption to solve the case. I would like to read more by this author too.

I was a little disappointed that the characters of the stories didn’t overlap. Still I was engaged by both stories. I recommend this to mystery and sci fi fans.


I received this through NetGalley. It qualifies for my NetGalley Challenge and was part of my November Sci Fi Month.
Posted by Martha Eskuchen at 11:21 PM