Audible Book Review: Cloak of the Light by Chuck Black

This is an engaging Christian story full of strong action.
Cloak of the Light
Wars of the Realm, Book 1
By: Chuck Black
Narrated by: Michael Orenstein, Katie Leigh 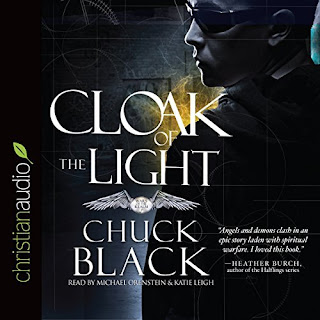 Publisher's Summary
Drew is caught in a world of light - just inches away from the dark.
What if...there was a world beyond our vision, a world just fingertips beyond our reach? What if...our world wasn't beyond their influence?
Tragedy and heartache seem to be waiting for Drew Carter at every turn, but college offers Drew a chance to start over - until an accident during a physics experiment leaves him blind and his genius friend, Benjamin Berg, missing.
As his sight miraculously returns, Drew discovers that the accident has heightened his neuron activity, giving him skills and sight beyond the normal man. When he begins to observe fierce invaders that no one else can see, he questions his own sanity, and so do others. But is he insane or do the invaders truly exist?
With help from Sydney Carlyle, a mysterious and elusive girl who offers encouragement through her faith, Drew searches for his missing friend, Ben, who seems to hold the key to unlocking this mystery. As the dark invaders close in, will he find the truth in time?
©2016 eChristian (P)2016 eChristian


Review:
Drew has had no church or religious training but he received a sense of honor through the military commitment of his father. Drew was 12 when his father died. His father’s best friend, Jake, became Drew’s mentor, training him in the arts of defense and other skills of the special services.

Drew’s mother has to move them to a new place and new high school. He befriends a science geek, Ben, in spite of opposition by some bullies. He also strikes up a tentative friendship with a reclusive, minister’s daughter, Sydney. A careless moment of high school fun leads to tragedy and Drew feels that he carries a dark cloud wherever he goes.

Drew is trying to move on in college when his friend Ben drags him into his professor’s lab to show him ‘shadow people”. Drew sees the dark man through Ben’s experiment but the lab blows up leaving Drew unconscious and Ben gone. Drew wakes in the hospital to discover his hearing and other senses are heightened but he has lost his sight. Initially Drew withdraws into his dark cloud even as Sydney and Jake try to encourage him. Surprisingly Drew’s sight returns and Drew discovers that he can see beings beyond the normal person’s sight. Although Drew finds himself in the midst of battles he doesn’t realize what he really is seeing.are not aliens but demons and angels.

I really enjoyed the engaging story and the perspective from a character who didn’t know what he was seeing. The writing moved well with plenty of action. I am definitely looking forward to more in this series.

Audio Notes: Michael Orenstein and Katie Leigh do a good job with narration. The male voice is more prevalent and he manages to convey the story from the view of a teenager. Ms. Leigh also adds to the performance with strong accents for the female characters. I enjoyed the background sounds and music of the performance although it took a little getting used to. It made the story come even more alive.


I have book two through NetGalley so I decided to listen to book one. (Audible credit purchase in May, 2017.) This qualifies for my 2017 Audiobook Challenge.
Posted by Martha Eskuchen at 11:16 PM