This is a creative sci fi view of Atlantis.
Letters from Atlantis
By: Robert Silverberg
Narrated by: Tom Parker 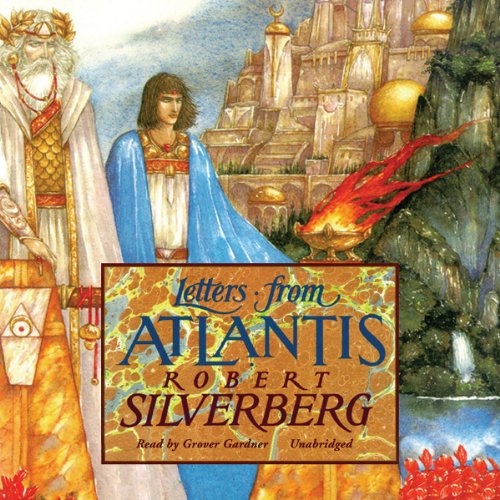 Publisher's Summary
It was a legendary island, a fantastic island. Atlantis. Or as its prince called it, Athilan. Roy had traveled through time with his partner, Lora, to find it - and now he was tantalizingly close to its shore. Time travel allowed Roy's consciousness to enter the mind of the heir to Atlantis' throne, and what he found disturbed him. Strange dreams. Impossibly futuristic inventions and machines. How could such an advanced city exist at this time? The rest of the world was, as Lora witnessed in her travels, a dark, barbaric land still thawing from the ice age.
Roy had been preparing for the odd isolation of time travel, but nothing had prepared him for his final arrival on Atlantis - a shimmering city far beyond his imagination! Roy knew this island's fate. According to legend, it would vanish into the sea. Roy also knew he had a limited amount of time to decipher the strange message in the Prince's mind - visions of cataclysmic events, mysterious rites to a faraway star. If Roy was in an Atlantis unlike anything the researchers had predicted, then what were its secrets? And when would it be destroyed?
©1990 by Agberg, Ltd.; (P)1998 by Blackstone Audiobooks


Review:
Roy and his time travel partner, Lora, have been sent from twenty-first-century to a distant past, They are not sent together but to different parts of the world in the time period. Roy is sent to observe the mysterious island of Atlantis as it existed while Lora is sent to the fringes of barbaric lands. The traveling is not in body but by ‘piggy backing’ into a mind of the time. Roy is pleasantly surprised to find himself where – or rather when -- he is supposed to be, sharing the brain of the Royal Prince of Atlantis. Roy knows that the city is barely a myth in the future, so he is awed to see the sophisticated development and technologies of the city.

Although he is not supposed to share the information of his travels, he writes letters to his love, Lora, to share his excitement and hopefully preserve the astounding wonders that he observes. Meanwhile he struggles to hide his letters and his presence from the very sensitive Prince who begins to think he has a demon in his head.

This is an imaginative story depicting a fantasy world of the mysterious Atlantis. I enjoyed the humor of the character and detail in the world building. The story is not overly exciting although there is conflict between Roy and his “host” and some drama in the visions of the cataclysmic destruction of the island. This is short and reads quickly.

This story may have be written for a younger audience. It is suitable for young teens and adults who find theories of Atlantis interesting.

Audio Notes: Tom Parker’s narration seemed a bit dry at first but once I grew accustomed to the voice, it helped give definition to the characters. I enjoyed the quick entertainment offered by the audiobook.


This was the last book I pulled out for #RRSciFiMonth. It qualifies for Mount TBR and Audiobook Challenge.
Posted by Martha Eskuchen at 11:51 AM