This is a solid military sci fi title.
Terms of Enlistment
Frontlines, Book 1
By: Marko Kloos
Narrated by: Luke Daniels 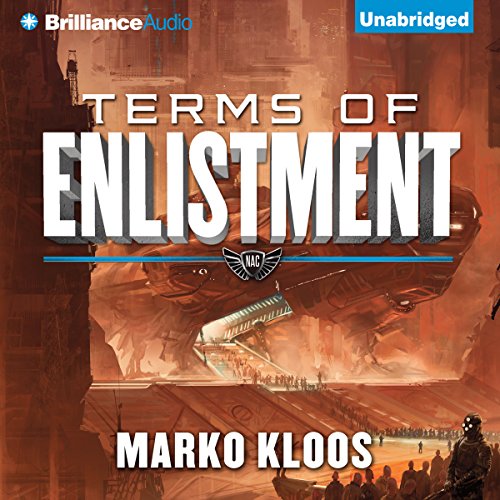 Publisher's Summary
The year is 2108, and the North American Commonwealth is bursting at the seams. For welfare rats like Andrew Grayson, there are only two ways out of the crime-ridden and filthy welfare tenements, where you’re restricted to 2,000 calories of badly flavored soy every day. You can hope to win the lottery and draw a ticket on a colony ship settling off-world, or you can join the service. With the colony lottery a pipe dream, Andrew chooses to enlist in the armed forces for a shot at real food, a retirement bonus, and maybe a ticket off Earth. But as he starts a career of supposed privilege, he soon learns that the good food and decent health care come at a steep price…and that the settled galaxy holds far greater dangers than military bureaucrats or the gangs that rule the slums.
The debut novel from Marko Kloos, Terms of Enlistment is a new addition to the great military sci-fi tradition of Robert Heinlein, Joe Haldeman, and John Scalzi.
©2014 Mark Kloos (P)2014 Brilliance Audio, all rights reserved.

Andrew Grayson is a 17-year-old welfare rat in a dysotpian world where there is a far divide between the few rich, the few upper class and the multitude of depressed, going nowhere welfare class. Andrew decides the only way out is to enlist in the service and hope he can make his way to a future rather than death because even in the service the lower class are considered expendable.

Boot camp is the expected torture but Andrew is lucky to team up with a wealthy and intelligent girl, Halley. At the end of the training she gets a coveted Navy assignment while Andrew is sent to serve in the Terrain Army (TA) which gets earth-side duty so he won't even get to go to space.

Andrew actually does well as a military grunt and for the most part likes his platoon team. They are sent on mission to help quell a welfare uprising but get trapped. There is a major firefight and Andrew helps pull off a rescue, but the PR guy isn't happy with his efforts which caused civilian casualties. He is facing discharge or imprisonment until his sarge leans on the desk jockey PR officer and gets Andrew a shot at his dream.

Andrew and Halley are reunited on a Naval ship and things are looking up until the ship is attacked and a handful of crew manage to survive on a hostile world. Halley helps come keep them alive initially and in a last-ditch rescue after Andrew and the marines face a devastating battle with Gargantuan aliens.

The author handles boot camp and unexpected combat action well. I really did like the action sequences but didn't get strong feelings for the characters. The plot wasn't bad, but the characters didn't seem fully fleshed out. Perhaps because they were teens they just didn't create a connection for me. The ending left me sort of "meh". It is an engaging first story for sci fi buffs to check out to see if it might click for them.

Audio Notes: Luke Daniels is a good choice for this story. He does a good job with the feel of the settings and the nature of the characters such as they are. I enjoyed the listen.


This is another TBR sci fi title from my Audible Library. It qualifies for Mount TBR and Audiobook Challenge.
Posted by Martha Eskuchen at 7:00 PM