This is a wonderfully engaging fairy tale.
Coiled
by H. L. Burke 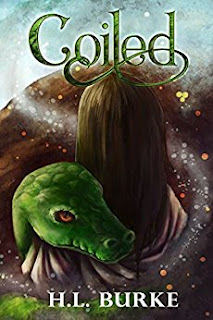 As the ugly twin to a perfect sister, Princess Laidra lives her life in the shadows—until her parents offer her as bait for a giant serpent.
Her escape attempt leaves her shipwrecked on a secluded island with only one inhabitant: Prince Calen, who lives under a curse. If anyone looks upon him, he turns into a giant serpent. Speaking to him in the darkness, Laidra sees past the monster to Calen’s lonely soul, and she determines to free him from the magic’s hold.
But if Laidra can’t break the curse in time, Calen will become a mindless creature of scales and fangs forever.
A YA mythology/romance that retells the myth of Eros and Psyche with adventure, magic, and true love.


Review:
Princess Laidra and her twin sister, Ellea, were cursed at birth. Ellea is beautiful but her beauty is enhanced by her acts of cruelty to others, such as crushing a small bird. Laidra has the gift of healing but with every healing touch she becomes uglier with moles and wiry hairs on her face and body.

Laidra’s mother insists she cover herself with a cloak and hood and forbades her from healing. But Laidra still helps the servants when they are ill or innocents who are injured. Since she knows she is already hideous she finds her worth in healing and helping others.

In another empire Prince Calen and his twin brother, Volen, suffer from a different curse. Volen becomes a monster serpent if he is left alone with no one to see him; Calen becomes the monster when anyone sees him. Their father chose to protect Volen by assigning him guards to be in his presence at all times while Calen was sent to a private island with a servant who is invisible and doesn’t trigger the curse.

Volen and the King think that perhaps the curse will be cured, or at least ‘fixed’ if Calen murders (eats a princess) or if Volen marries one. They have planned to take Laidra to abandon her to Calen or they will marry Volen to Ellea.

Laidra escapes and comes to Calen’s island where he rescues her from the waves. Now Calen and Laidra develop a friendship as they talk and share music together, but never look upon each other. Could either of them risk committing the other to a life long tie if the curse isn’t cured for either or both?

Meanwhile the man/god who started the curses is surprised by Laidra’s play in events. He wants to continue to punish his old enemies. But perhaps the other gods will step in to allow the young people to change their undeserved fates.

I really found this a charming fairytale. It is a story of evil intentions and good souls facing obstacles. There is sorrow, fear, character growth and love. The writing is clean and a good blend of description and character building although there were a few scenes that didn't seem to have complete follow through. I am not familiar with the Eros and Psyche mythology that this is based on so it does make me curious about that story. It also made this story 'new' to me. I recommend this to readers who enjoy a good fairy tale with curses, magic and love.


I received this from NetGalley and it was the final read in my 2017 NetGalley Challenge.
Posted by Martha Eskuchen at 4:25 PM