Audible Book Review: We Are Legion (We Are Bob) Bobiverse by Dennis E. Taylor

This is wonderfully entertaining and I am getting book two soon.

We Are Legion (We Are Bob)
Bobiverse, Book 1
By: Dennis E. Taylor
Narrated by: Ray Porter 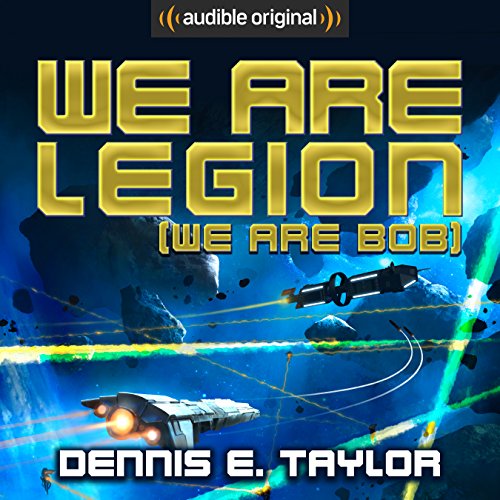 Publisher's Summary
There's a reason We Are Legion, We Are Bob was named Audible's Best Sci-Fi Book of 2016. Unique, hilarious, and utterly addictive, Dennis E. Taylor's debut novel kicked off an Audible-wide obsession among sci-fi diehards and new listeners alike.
Bob Johansson has just sold his software company and is looking forward to a life of leisure. There are places to go, books to read, and movies to watch. So it's a little unfair when he gets himself killed crossing the street.
Bob wakes up a century later to find that corpsicles have been declared to be without rights, and he is now the property of the state. He has been uploaded into computer hardware and is slated to be the controlling AI in an interstellar probe looking for habitable planets. The stakes are high: no less than the first claim to entire worlds. If he declines the honor, he'll be switched off, and they'll try again with someone else. If he accepts, he becomes a prime target. There are at least three other countries trying to get their own probes launched first, and they play dirty.
The safest place for Bob is in space, heading away from Earth at top speed. Or so he thinks. Because the universe is full of nasties, and trespassers make them mad – very mad.
Listener-favorite narrator Ray Porter (14, The Fold) brings the many Bobs into being in all their glory, delivering a performance that listeners have described as "outstanding," "nuanced" and a "dizzying tour de force."
©2016 Dennis E. Taylor (P)2016 Audible, Inc.


Review:
Bob Johansson has sold his software company for millions. He has uploaded his brain cells/scan to be saved for future placement in a body when the technology is available. Meanwhile he plans to enjoy traveling, reading and relaxing for his retirement. He didn’t expect to die suddenly.

Bob ‘awakens’ in a future world to discover that he is being prepared to become part of a computer. He is property of the state and has no control over where he is assigned. Bob is in competition with several other saved brains to see which – or, who – will be used to control an AI probe heading to space to search for habitable planets. Bob learns through his mentor that the US project is in a race with other nations to be the first successful launch. There are also enemies who object to the use of the brains.

Bob manages to survive a launch that is rushed to escape sabotage. He must search his system to make sure that there are no remaining sabotage traps. He successfully makes it to a safe place in space where he begins to replicate himself, with each new “Bob” picking its own name. As the team continues in the mission to develop stations and seek habitable planets, they discover that some of the other nations have made it into orbit also. And some of those do not want to share space or what remains of the home planet earth.

This story is full of fun humor as well as exciting suspense, danger and strategies. The brain expanded with computer capabilities is an intriguing and creative notion. It was fun that the replications have different personality strengths, or weaknesses, from the original Bob. It is also fun to have the original Bob, and brothers/sons, share bits of the far distant past which is our current culture.

This is fast-paced and well written. I highly recommend this to sci fi fans, especially those who like their sci fi adventure served with a good slice of humor.

Audio Notes: Ray Porter does a great job narrating this. He pulls in the nuances of the characters and makes the story zing along. I loved this audio experience and look forward to book two!


This audio was added with a credit to my Audible Library in 2016. It qualifies for Mount TBR and Audio Book Challenge.
Posted by Martha Eskuchen at 7:36 PM