This is a good, short mystery series.
Murder by Other Means: The Dispatcher, Book 2
By: John Scalzi
Narrated by: Zachary Quinto 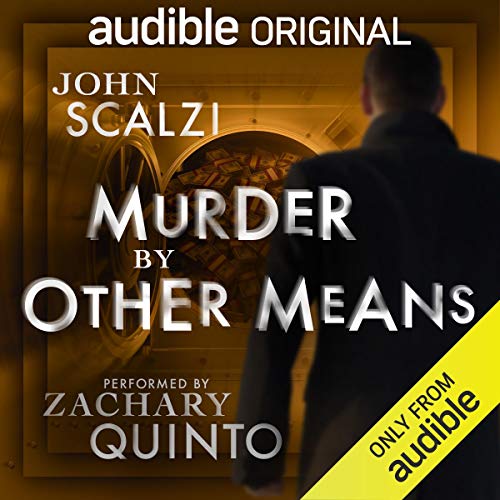 
About This Audible Original
From Hugo and Audie Award-winning author John Scalzi comes an exciting sequel to The New York Times best-selling, number one Audible hit The Dispatcher, performed by the incomparable Zachary Quinto.
Welcome to the new world, in which murder is all but a thing of the past. Because when someone kills you, 999 times out of 1,000, you instantly come back to life. In this world, there are dispatchers—licensed killers who step in when you’re at risk of a natural or unintentional death. They kill you—so you can live.
Tony Valdez is used to working his job as a dispatcher within the rules of the law and the state. But times are tough, and more and more Tony finds himself riding the line between what’s legal and what will pay his bills. After one of these shady gigs and after being a witness to a crime gone horribly wrong, Tony discovers that people around him are dying, for reasons that make no sense...and which just may implicate him.
Tony is running out of time: to solve the mystery of these deaths, to keep others from dying, and to keep himself from being a victim of what looks like murder, by other means.
©2020 John Scalzi (P)2020 Audible Originals, LLC


Review:
Tony is a dispatcher who is accustomed to killing … as long as it is within the rules which allow him to kill, or “dispatch” people whose lives may be saved when they come back to life. Tony agrees to take a job that isn’t quite on the up and up, but he needs the money. He doesn’t expect the situation to cause trouble as it isn’t in the interest of any of the participants to reveal the job.

As Tony is in the bank to deposit his fees, he becomes a witness to a bank robbery. The head of the gang turns to shoot the others, with that apparently being their get-away plan. The problem is, the first man shot stays down instead of disappearing. The dead man is the one in a thousand who stays dead. That means the cops can trace the identity of at least one of the robbers who turns out to be another dispatcher. As the investigation moves forward clues begin to point to Tony as part of the gang, if not its leader.

The lead detective is soon found dead, supposedly of a suicide. Then others associated with the robbery. Tony is in a race to uncover the true villains before others around him die of murder ‘by other means’ while the authorities focus only on him.

I like Tony’s character as he uses his assassin skills to help others even if it isn’t always comfortable. I enjoyed this mystery and the twists that Tony has to untangle. I also like that this is a quick listen. I recommend this to fans of mystery with a twist.

Audio Notes: Zachary Quinto’s narration fits this series nicely. His voice captures Tony’s personality and character and keeps the edgy nature of the mystery. I liked listening to this mystery.