This zombie story follows a handful of survivors trying to stay a step ahead of the infected. 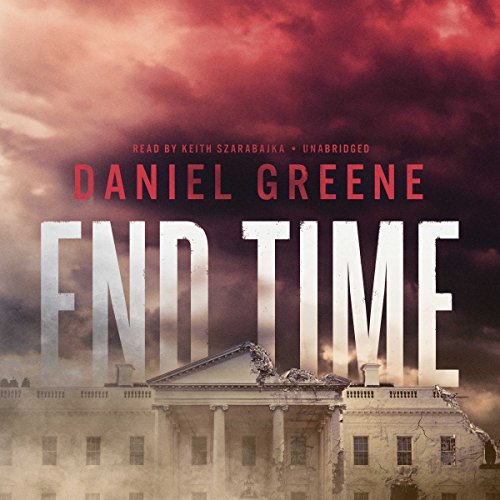 Publisher's Summary
The protests in front of the embassy aren't what they seem....
In the dark, primal jungles of the Congo Basin, something is ravaging the local population. When protests turn violent in front of the US embassy in Kinshasa, only the foreign policy experts paid attention. Civil war erupts, and people rip each other apart in the streets of the African capital.
To avert disaster and preserve its self-image, an overwhelmed State Department dispatches a team of elite counterterrorism agents to bring their besieged people back alive. Mark Steele, a young agent within the division, and his team of gritty operatives are used to trudging through the worst society has to offer, all while operating from the shadows. But Steele's team is plunging headlong into a maelstrom of death so much worse than rebels in the streets.
A highly contagious microbe is spreading unchecked, killing everyone in its wake only to bring them back again as the ravenous undead. Only a lone CDC virologist understands the extent of the outbreak at hand. He cowers among the embassy staff praying for extraction from the hands of death, fearing his part to play in the epidemic.
Follow this harrowing tale of survival, duty, love and horror as the living dead bring the world to its knees. The first installment of an epic series, End Time starts as a slow burn that turns into a breakneck-paced struggle for survival. Greene does an excellent job of depicting individual stories within the larger scope of the global epidemic. Enter the End Time.
©2018 Daniel Greene (P)2018 Blackstone Audio, Inc.

Review:
Doctor Joseph was flown to the Congo as a CDC virologist to study a “Monkey” Virus. He is horrified when his tent of patients turns into a walking mass of the ‘dead’ feeding on the living. He doesn’t understand what has happened, but he knows he needs to get back to the States to warn the CDC to set up quarantines. Having reached the embassy Joseph is frightened when he sees the state of chaos.

The State Department sends out a specially trained counterterrorism team to rescue the people at the embassy, but particularly Doctor Joseph. The team led by hardcore warrior, Steele, has to struggle to get the Doctor out. Along the way they find themselves exposed to the madness in the confines of an airplane. Steele is a man who is accustomed doing what it takes to save lives, so he had a little difficulty realizing that some of the ‘people’ around him are enemies.

Things aren’t calm back in the States and the Steele’s girlfriend, Gwen, is struggling to get home safely. Along the way she picks up two other uninfected, one a protector and the other who needs a protector. She is convinced that Steele will return home to save her but can he survive to get there in time?

I figured I should include at least one Zombie story for October. This one has a good mix of action and character development. There isn’t much new about the nature of the infected, nor the nature of idiotic bureaucrats who won’t listen to informed warnings. There are a few detailed segments describing guns and military training which slow the pace a bit. The result is an entertaining story, if not a gripping one. I do have the second and third books so I will continue the story sometime.

Audio Notes: Keith Szarabajka does a nice job with the narration. He provides distinct voices and good energy. The audio enhanced my enjoyment of the story.