This is a fun listen with some minor issues. 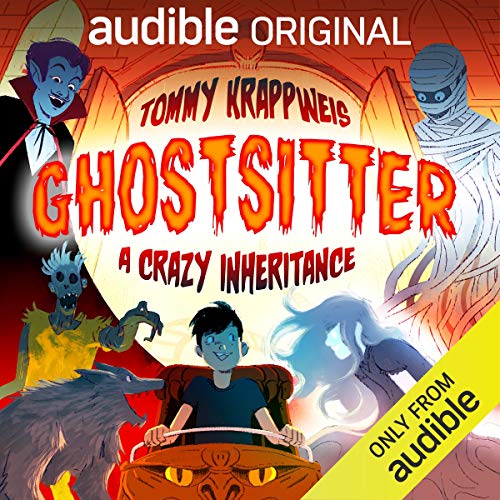 About This Audible Original
A whole-family listen for fans of Hotel Transylvania and The Addams Family.
When Tom is invited to the reading of a will of a great-uncle he’s never heard of, there’s no way to know what to expect. But on the long list of possible things to inherit, a travelling carnival ghost train is the very last on the list.
To get his full $10 million inheritance, all Tom has to do is run the antique ride until his 18th birthday. Easy. Except for a strange caped-creep he’s never met, who’s trying to con him out of the money...and the actual ghosts and ghouls who call the ride home.
Over the decades, vampire Vlarad, zombie Wombie, Hop-Tep the mummy, werewolf Welf, and ghost girl Mimi have created their own unique family, and they welcome Tom into their circle as a first-time "ghostsitter".
Keeping the spirits secret from the outside world is not easy, but with wit and ingenuity, Tom proves, time and again, that he is exactly the right person for the job.
©2015 Tommy Krappweis (P)2020 Audible Originals, LLC

Review:
Tom is a young teen who has been raised by his lively grandmother. Tom is surprised to learn that he has inherited ten million dollars from an uncle he never met. Another stranger, Welf, arrives to take Tom and his grandmother to meet with a strange lawyer. The lawyer explains that Tom has to run his uncle’s antique travelling carnival ghost train in order to receive the inheritance. Before Tom has a chance to register everything a man in a cape with a red clad female companion push into the room. He offers Tom a significant cash price for the tour train. As Tom hesitates, a brawl ensues.

In another day, Welf takes Tom off to see the train. Tom is a bit dismayed when he sees what appears to be a dilapidated train which he thinks wouldn’t attract anyone. Tom soon learns there is more involved in the ride when he meets the unique team of unusual characters that work together to make the ride successful. This group includes a vampire, a zombie, a mummy, a ghost girl and of course werewolf Welf.

Tom is a little uncomfortable moving into his uncle’s very dusty caravan home and he worries he will not be able to fulfill his job as a “ghostsitter”. When the group is attacked by demon killing angels, Tom quickly learns that each member of the team, and that includes him, contributes to protect each other and keep the train going.

This is a fun story that has a little "Scooby Doo" vibe to it. The creatures are fun, rather than scary. It is an issue that the enemy are a type of angel but I don't think that has to ruin the story as Tom shows by pushing them to show mercy and love to other creatures. There are sound effects that add to the story and there is a quirky little song between sections that is surely designed for the kids to enjoy. I found it cute but after a couple of times I did fast forward to the next section. I plan to share this with my grandchildren because I do think they will enjoy it, but adults can enjoy it too.

Audio Notes: There is a full cast whose energetic delivery enhances the entertaining story. I would like to listen to more in the series.