This is a quick listen with a demon hunting "hand of God". 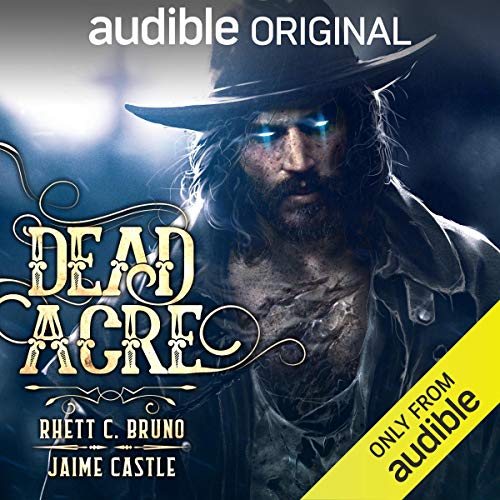 About This Audible Original
The Witcher meets the The Dresden Files in this Weird Western tale by the Audible number-one bestselling duo, performed by Roger Clark (Red Dead Redemption 2’s Arthur Morgan).
James Crowley met his mortal end in a hail of gunfire. Now, he finds himself in purgatory, serving the White Throne to avoid falling to hell. Not quite undead, though not alive either, the best he can hope for is to work off his servitude and fade away.
His not-so-sacred duty as a Hand of God? Use his new abilities to hunt down demonic beings that have infiltrated the mortal realm.
This time, the White Throne has sent him to the middle of nowhere: a western town called Dead Acre with a saloon, a moldy church, and little else worth talking about. There isn’t even a sheriff. But the local cobbler has gone missing at the same time as a number of graves were desecrated.
Crowley must follow the clues, all while dealing with a cutthroat gang which treats Dead Acre like they own it, an extraordinary woman who makes it hard to focus, and locals not keen on strangers.
Life isn’t simple for a Hand of God.
©2020 Aethon Books (P)2020 Audible Originals LLC


Review:
James Crowley was a rough cowboy outlaw… but he was still a good guy who tried to save a woman and child. That is how he died. But he didn’t go to heaven or hell. Instead, he was given a ‘second chance’ to avoid hell. He is asked to be a Hand of God to fight evil and unholy enemies of a demonic nature. Crowley has a strained relationship with his supervisor angel. This is partially the result of Crowley being sent to a location with only limited knowledge. He just knows he will face trouble, without knowing who the bad guys or demons are.

Crowley has been sent to a town called Dead Acres. The name fits the tone of the town, and few people welcome the man they perceive as a lawman. Crowley soon learns that a husband of a beautiful woman has gone missing. While he wonders if this is his assignment, Crowley quickly makes enemies of the local gang when he interrupts them when they begin to harass the lady. Then his angel tells him that Dead Acres borders demonic territory and there is more danger to expect.

Crowley’s investigation takes him to a dilapidated church and a cowering preacher who is doing nothing to help protect the community. Crowley may find the missing husband, but before he can complete his assignment, he will face creatures he hasn’t faced before.

I liked Crowley’s character and the tough western setting. I also enjoyed the clear writing and first-person view. I look forward to more in this series. I recommend this to fans of western and fantasy.

Audio Notes: Roger Clark does a good job of narration. He captures and portrays the dark nature of the characters and story. I totally enjoyed this audible experience.


Source: December 2020 free Audible Plus Catalog. This qualifies for 2021TBR and 2021Audiobook goals. This is my second listen for #FraterfestRat.
Posted by Martha Eskuchen at 8:33 PM