As usual with this series, I enjoyed the legal aspects and mystery... and dogs.
Best in Snow
(Andy Carpenter #24)
by David Rosenfelt
Narrated by Grover Gardner 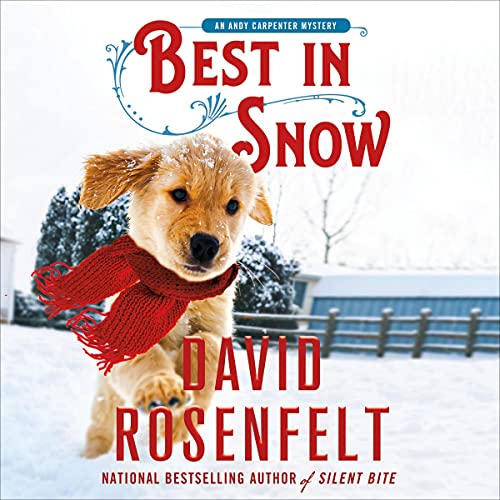 Publisher's Summary
In this Christmas mystery, Best in Snow, lawyer Andy Carpenter and his golden retriever, Tara, are on the beat after a body turns up in the snow and a journalist is nowhere to be found.
Christmas has come early to the town of Paterson, New Jersey, in the form of a snowstorm that left over two feet of snow on the ground. Lawyer Andy Carpenter likes snow - to a point - but he misses the walks he takes his dogs on every day.
When the snow starts to melt, and a body is discovered, Andy ends up in the office of the local newspaper editor. The murder victim is that of crooked businessman Thomas Lansing, who had an infamous relationship with the newspaper. Last year a young reporter published an expose, and Lansing had him fired for libel. Now, the young reporter - and prime suspect - isn’t answering his phone...and everyone is worried.
Andy agrees to take the case, though it’s not looking good this holiday season. The snow is piling up - along with the evidence - in the next Christmas mystery in this best-selling series from David Rosenfelt.
A Macmillan Audio production from Minotaur Books
©2021 David Rosenfelt (P)2021 Macmillan Audio

Review:
Wealthy and want-to-be retired lawyer, Andy Carpenter, is out walking the dogs when his main dog, Tara, sniffs out a body under the snow. It turns out to be the local mayor and the police are quick to focus on a young reporter, Bobby Nash, who had reason to have a grudge. When they find blood in Bobby’s trunk, he is arrested for the murder. One of Andy’s drinking ‘buddies’, Vince, a newspaper editor and Bobby’s former boss, coerces Andy into taking on the defense representation.

Evidence builds against Bobby as his car and phone are placed at the scene and the mayor’s wife advises the police that Bobby made threatening phone calls a few days before the murder. Unfortunately, Bobby isn’t able to help much with the facts as he was in a car accident shortly after the murder and has no memory of the events. When a potential witness is killed, it seems to turn the search away from Bobby who was in the hospital. Until it is determined that the source of the second murder could have been set up before Bobby was arrested.

Still, Andy sees lots of holes in the evidence. He just needs more facts to lead the jury to a different conclusion – to reasonable doubt. Andy gathers his quirky crew of investigators, and they get busy searching out alternate suspects. Attempts to eliminate Bobby and Andy make it clear that there are other suspects to be found.

As usual in this fun series, the Carpenter Team is able to dig out good facts pointing to bad actors further afield. The necessary details don’t get to Andy until the eleventh hour and he and his client have to wait out the jury verdict.

I enjoy this series for its unique characters. Andy has a snarky personality but his crew dish right back at him. I also enjoy the legal proceedings, in preparation and presentation. The writing is concise and moves along at a good pace. I recommend this story to fans of legal procedure mysteries. Each book is a new murder or criminal event so they can be read as standalones. However, I do recommend reading the first several to get to know the characters… and that may lead to reading more in the series.

Audio Notes: Grover Gardner is the voice of Andy Carpenter and pulls me right into the story. I have read one or two of the books on Kindle and I still can hear Gardner’s voice. I have to smile as soon as I start listening. I love listening to this series.