This is a different future dilemma and a good mystery.
The Dispatcher
By: John Scalzi
Narrated by: Zachary Quinto 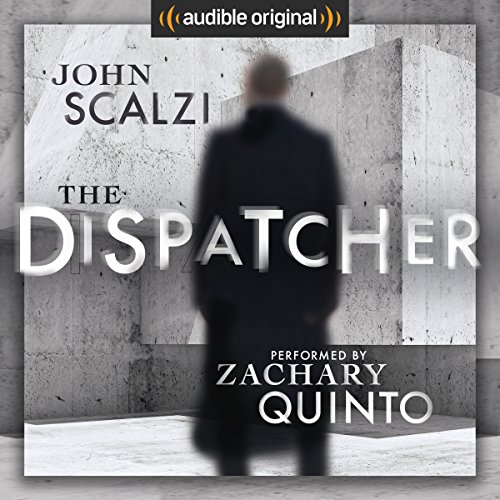 Publisher's Summary
Earphones Award Winner (AudioFile Magazine)
Winner, 2017 APA Audie Awards - Original Work
Zachary Quinto - best known for his role as the Nimoy-approved Spock in the recent Star Trek reboot and the menacing, power-stealing serial killer, Sylar, in Heroes - brings his well-earned sci-fi credentials and simmering intensity to this audio-exclusive novella from master storyteller John Scalzi.
One day, not long from now, it becomes almost impossible to murder anyone - 999 times out of a thousand, anyone who is intentionally killed comes back. How? We don't know. But it changes everything: war, crime, daily life.
Tony Valdez is a Dispatcher - a licensed, bonded professional whose job is to humanely dispatch those whose circumstances put them in death's crosshairs, so they can have a second chance to avoid the reaper. But when a fellow Dispatcher and former friend is apparently kidnapped, Tony learns that there are some things that are worse than death and that some people are ready to do almost anything to avenge a supposed wrong.
It's a race against time for Valdez to find his friend before it's too late...before not even a Dispatcher can save him.
©2016 John Scalzi (P)2016 Audible, Inc.


Review:
It is a future time and murder is almost impossible. Not because there are no criminals or bad people. They can kill, but 99.9% of the victims vanish and wake up at home or a familiar, safe place… and alive. A few people train to become licensed “Dispatchers”. The Dispatchers are called in to ‘dispatch' people who are about to die, whether from a violent act, during surgery gone wrong or an accident. It takes a special person to be able to deal with the emotions and consequences and Tony Valdez is such a person.

A local police detective calls on Tony to help find a fellow Dispatcher who has gone missing. Tony and the man used to be friends but the man’s wife blames Tony for introducing her husband to a shadier part of dispatching -- undocumented or “under the table” jobs. The police detective is sure that Tony can uncover clues even if he is forced to work against his will.

It is clear from the beginning of the story that not everyone approves of the job of a Dispatcher. There are tensions and ethical considerations to explore. Who knew that the aspect of ‘licensed to kill” could be a fun premise for a mystery. Well, obviously talented author John Scalzi figured this out. I enjoyed the quick detective investigation and the sometimes-brash dialogue and interaction between characters. I also liked the clever (albeit cruel) methods for killing that are used.

This does not have the humor aspects readers might associate with Scalzi. However, it has the Scalzi imagination and creativity. This is a short story but I could see it being a premise for other mysteries. I recommend this to mystery and fantasy/sci fi fans.

Audio Notes: Zachary Quinto did a great job with the narration. He nails the tone without infusing excess emotion. This fit the darker nature of the mystery. The narration enhanced my enjoyment of the story.