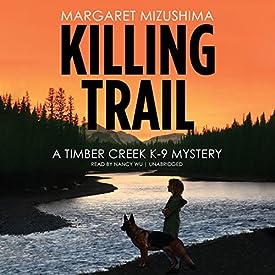 Publisher's Summary
When a young girl is found dead in the mountains outside Timber Creek, lifelong resident Officer Mattie Cobb and her partner, K-9 police dog Robo, are assigned to the case that has rocked the small Colorado town.
With the help of Cole Walker, a local veterinarian and single father, Mattie and Robo must track down the truth before it claims another victim. But the more Mattie investigates, the more she realizes how many secrets her town holds. And the key may be Cole's daughter, who knows more than she's saying. The murder was just the beginning, and if Mattie isn't careful, she and Robo could be next.
Suspenseful and smart, Killing Trail is an explosive debut that will have listeners clamoring for more Mattie and Robo for years to come.
©2015 Margaret Mizushima (P)2016 Blackstone Audio, Inc.


Review:
Mattie is a young officer who has worked hard to be accepted in her hometown force. She tested out above her co-officers in order to participate in the K-9 program, getting to have a K-9 dog, Robo, as a partner and training with the dog. Mattie and Robo are assigned to a work a case when a local high school girl is found dead (by Robo) in a shallow grave in the woods near Timber Creek. It appears that dogs being trained by a local man may be involved in the mysterious death.

Mattie and Robo work with local veterinarian, Cole Walker, who initially is called upon to take care of the victim’s sick dog. Cole is struggling with the news that his wife has finalized divorce proceedings after walking away from the family several months before. His ex-wife wouldn’t even visit with their daughters over the summer when they were nearby. Cole has to find a solution for a housekeeper to stay with his girls while he is at the office/lab so much.

Cole knew the dead girl who was a good friend of his elder daughter, Angela. Angela doesn’t believe that her friend could have been involved with drugs, but she does know some facts that help move the investigation along.

Mattie begins to build a growing list of suspects who may be involved, but sometimes her own experiences cause her to make conclusions that may not be accurate. When one of the main ‘persons of interest’ is found dead the race to uncover the details becomes more urgent. Can she and Robo find the truth before someone else, maybe one or both ends up dead?

I enjoyed Mattie’s strong, smart, but not perfect, character. She shows insecurity and expresses concerns over her decisions which is a little annoying although not unrealistic. I liked how the author shared good details of the abilities of the trained police dog while also showing critical learning issues needed to allow the officer and dog to work together successfully. Cole is a possible romantic interest for future stories but clearly was not in a position to develop a relationship so soon after his divorce. The mystery moves along well making this a solid beginning to a K-9 series which I recommend to those who like the combination of women police and K-9.

Audio Notes: The narration by Nancy Wu is more of a reading than a performance. She does a few voices but mostly just reads. It is an adequate presentation but not special. Still, I liked having this in audio which gives me a chance to ‘read’ (listen) faster.


Source: 2/25/18 Audible Purchase $4.95. This qualifies for Audiobook Challenge and a 2018 title for my Alphabet Challenge.
Posted by Martha Eskuchen at 8:41 PM